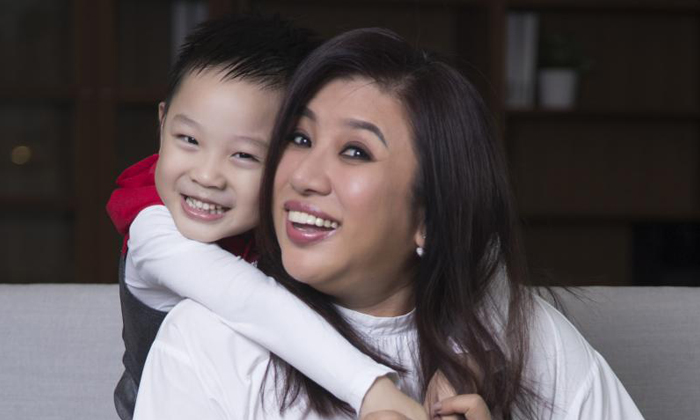 Getai celebrity and actress Liu Ling Ling, 54, has finally divulged details regarding the parentage of her son, who is now five years old.

The veteran star made headlines in 2013 when she gave birth to Xiang Xiang at the age of 50, after a pregnancy that was kept secret from everyone including her family.

At that time, she declined to divulge Xiang Xiang's surname and the identity of his father.

She also reportedly told Shin Min Daily News: "Whoever you see me with one day, that person will be the child's father," and "I don't know who the father is."

Liu became the subject of malicious and hurtful comments, with some netizens claiming that she had bought or adopted her baby.

There were also rumours that she had an estranged marriage with businessman Qiu Jinhai.

In a Lianhe Wanbao interview on Aug 5, Liu finally opened up about Xiang Xiang's parentage and confirmed that Qiu is indeed the child's biological father.

Liu previously told Wanbao that her husband had racked up $600,000 in debt after his real estate and insurance business failed.

As he could not replay his debts, Qiu left Singapore in 2003 to work abroad.

In 2012, an anonymous person sent messages to those in the entertainment circle, saying that Qiu had returned to Singapore and was living with Liu in a condominium unit in the northeast region.

At that time, Liu strongly denied being in contact with Qiu.

In September the following year, news of Liu giving birth broke, shocking the showbiz industry. Speculation over the identity of Xiang Xiang's father was rife.

According to Wanbao, there were three main 'theories' as to who Xiang Xiang's father was -- Liu's husband Qiu, local director Royston Tan and a 40-year-old Chinese businessman who was a friend of Liu's.

Even then, Liu refused to reveal the truth and kept her son out of the spotlight.

She also denied that Qiu was Xiang Xiang's father, telling Wanbao: "We have been married for 17 years. If we wanted to have a child, we would have done so long ago!"

However, in Wanbao's Aug 6 report, Liu admitted that she and Qiu had conceived Xiang Xiang through In Vitro Fertilization (IVF).

Having gone through greats pains to give birth to her son, Liu regarded him as her 'everything' and refused to let any harm come to him.

She also confessed that she was worried about Xiang Xiang's safety and how debtors might harm him.

As such, she decided to hide the truth about his father's identity.

"Even my mother and younger brother were kept in the dark when I was pregnant. I would rather bear the pressure alone," she added.