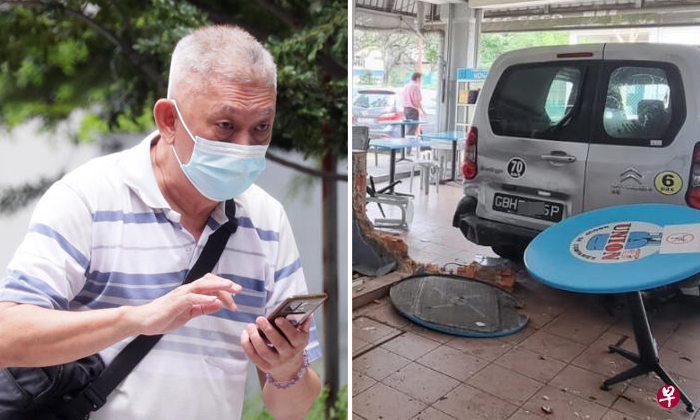 A delivery driver lunged to catch a falling parcel in his van and stepped on the gas pedal so hard that the vehicle reversed and mounted two kerbs, hitting two victims at an eating house behind him in March 2021.

The victims, 69 and 40, sustained multiple fractures and one of them still suffers from her injuries to this day.

The driver, Tan Hwee Koon, 64, had held the brake with his foot with the reverse gear still engaged when he parked his car, instead of shifting it to parking or neutral.

On Thursday (March 10), the Singaporean pleaded guilty to causing grievous hurt through a negligent act and was jailed for two weeks and disqualified from driving for 24 months.

The court heard that Tan worked as a driver for the past 20 years, and on March 12 last year, drove a van - a Citroen Berlingo - for a delivery job at around 12.40pm.

He stopped the van in a parking space with its rear facing Chong Hock Eating House in Tuas, but kept the vehicle in place by holding the brake pedal while the reverse gear was engaged, said Deputy Public Prosecutor Bryont Chin.

The van's engine was running at the time.

He then reached to grab a parcel on the seat next to his and his foot shifted from the brake pedal to the accelerator, causing the van to charge backwards.

DPP Chin said: "He pressed onto the accelerator pedal with such force that it caused the van to accelerate over both a 13cm-high parking block and a 13cm-high kerb before entering (the eating house)."

The incident injured two people, including stall assistant Chu Lai Kiew, 69, who was trapped in her stall.

She was later taken to hospital and given 31 days' medical leave after suffering injuries that included a fractured leg and ankle.

A medical check-up later that year revealed that she still suffered from a spinal injury.

The other victim, Mr Low Mun Wai, 40, who was seated near the van at the time, fractured his arm and was given 83 days' medical leave.

Tan got out of the van and remained at the incident site until the police arrived and cooperated with investigations, noted DPP Chin, who sought a jail term of one to two weeks' and 24 months' disqualification from driving.

DPP Chin added that severe harm was caused to the two victims, and said that Ms Chu suffered a permanent injury and that Mr Low required multiple operations.

In his mitigation plea, Tan said he had no intention of causing harm and pleaded with the judge for leniency.

Taking the prosecution's position, District Judge Paul Chan said: "(Tan) controlled the vehicle in a manner that was fairly negligent.

For causing grievous hurt by doing a negligent act, Tan could have faced up to two years in jail and fined up to $5,000.