Istana crash that killed 2: Driver had consumed alcohol and was pursued by 3 cars after dispute in club 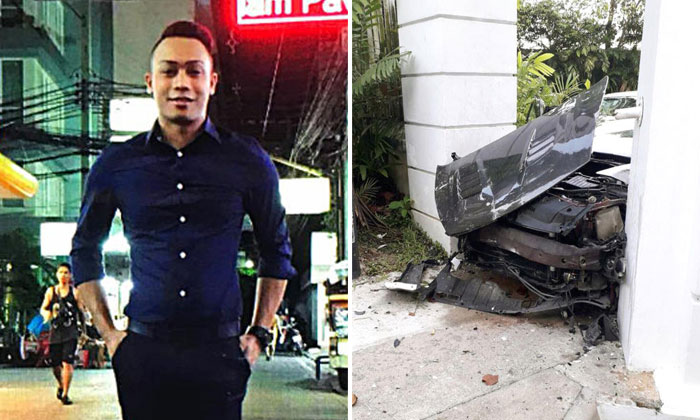 The driver of a car involved in a fatal crash outside the Istana in December last year had consumed alcohol shortly before the accident, said the state coroner.

It was also revealed that 25-year-old logistics worker Mohamed Khairulanwar Mohamed Sani had been driving his hired vehicle at a fast speed as he was being chased by three other cars following an incident at a club in Marina Square.

According to The Straits Times, Mr Khairulanwar was found to have had 129 milligrammes (mg) of alcohol in 100 millilitres (ml) of blood.

The legal driving limit is 80mg of alcohol in 100ml of blood.

Mr Khairulanwar and receptionist Nurul Filza Syazwani Abdul Rahim, 21, were killed after the silver Honda Civic crashed into the Istana's rear gate at Cavenagh Road at 6.06am on Dec 16 last year.

Ms Nurul's boyfriend, 28-year-old Johari Sharif, who was also a passenger in the car and sitting behind Ms Nurul in the rear seat, was the sole survivor.

In a previous report, a friend told reporters that the couple had plans to get married.

All three victims were acquainted with one another.

On Aug 17, State Coroner Kamala Ponnampalam found the deaths of Ms Nurul and Mr Khairulanwar to be a "tragic misadventure".

She said: "The toxicological analysis of Mr Khairul's biological samples revealed an alcohol content of more than 1.6 times the legal limit which may have manifested symptoms such as reduced concentration, lack of coordination, inhibition of judgment or slow reaction time.

"The alcohol coupled with his fast speed of travel had likely caused Mr Khairul to lose control of his vehicle when he made the abrupt turn and collided into the gate and the pillar at the rear of the Istana."

Mr Khairulanwar's friends and family were shocked and saddened when they heard the news and told reporters that he worked as a part-time Grab and Uber driver.

The trio were at Club Baliza at Marina Square earlier that day but were told to leave after Mr Johari was punched in an altercation.

He said that they decided to have their supper after leaving the club and were waiting for a friend at Raffles Boulevard in the Honda Civic when they were surrounded by three other cars.

Mr Khairulanwar managed to drive away but was tailed closely by the other vehicles.

However, the state coroner said that the other vehicles were not following the car when it turned into Cavenagh Road.

Mr Khairulanwar was driving the car at an average speed of between 93kmh and 97kmh shortly before the accident, the state coroner said.

Mr Khairulanwar and Ms Nurul were taken to Tan Tock Seng Hospital (TTSH) after the crash where they were pronounced dead later that morning.

Mr Johari suffered injuries on his face and a broken rib and was warded for four days in TTSH.

Criminal Investigation Department (CID) officers from the Secret Societies Branch later arrested the drivers of the three other cars.

The trio admitted that they had pursued Mr Khairulanwar's vehicle. Their names were not revealed in court documents.

"Two of them stated that they wanted to confront him because of an earlier incident when Mr Khairul's friends had taken photographs of one of them," the state coroner said.

"The third person said he was simply following the other two persons and he was not aware of their intentions."

Related Stories
Woman killed in crash outside Istana: She had been planning to get married to BF
Man killed in car accident outside Istana was a "safe driver", worked part-time for Grab and Uber
2 killed and 1 hospitalised after driver smashes into pillar near Istana rear gate
More About:
accident
death
injured
istana
drink-driving