'Inhuman' cabby refused to send pregnant woman and kids back to Yishun home, left them in Toa Payoh 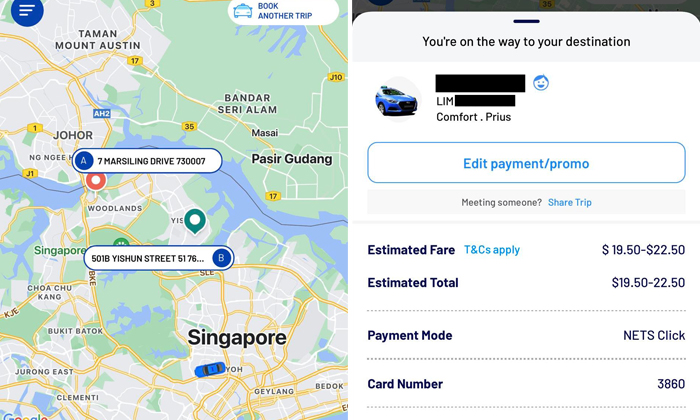 A pregnant woman and her two children were left traumatised by a ComfortDelGro taxi driver who took them to Toa Payoh instead of their desired destination in Yishun.

Facebook user Zdhnray Mohammad shared the upsetting experience that his wife and two kids had on Sunday night (Aug 21).

In a post that has garnered over 4,000 shares, Zdhnray said he had booked a taxi via the ComfortDelGro app for his family at 9.54pm. The taxi was meant to take them from Marsiling Drive to Yishun Street 51.

Upon arriving, the cabby lit a cigarette and told his passengers "to wait inside the cab while waiting for him to finish smoking", said Zdhnray.

Zdhnray's wife later informed the cabby of her preferred route. However, he made a different suggestion and was turned down by her. But sometime during the journey, she noticed something amiss.

Zdhnray said: "Feeling something was off, my wife checked the map and told the driver, 'Uncle, I say Yishun. Why you want to go towards Toa Payoh?'

"The driver was defensive and lied saying, 'No, in front there is Mandai' when it was clearly heading towards Lornie Road/Braddell. He then asked my wife, 'Usually how much you travel from Marsiling to Yishun?'

"After my wife said it’s less than $20, he started to get angsty and showed attitude. To my wife's horror, the driver said, 'Like that I drop you off at Toa Payoh. You go take another cab, I don’t want to drive you! I wanna go back home I stay at Toa Payoh. You are wasting my time and petrol.'

"Being heavily pregnant, my wife began to have panic attacks and have series of shortness of breath. So she called me and I told her to put on speaker for me to talk to the driver. When on speaker, I ordered the driver to send my wife and kids back to Yishun but the driver just refused to do so."

According to Zdhnray, the cabby dropped his wife and kids in Toa Payoh and refused to take them to Yishun.

"This is utterly disgusting and resulted in a traumatic experience especially for my wife and kids," Zdhnray added.

"Not only the driver was rude, he was inhumane to drop at a place that was far from the actual destination despite knowing that my pregnant wife was with two toddlers who were crying from this whole situation. What kind of human does that?!"

In response to a Stomp query, Ms Tammy Tan said: "Our cabbies are expected to be professional by taking the right or preferred routes and completing every trip that they take.

"In this instance, the behaviour of the cabby was completely unacceptable. As such, we have terminated his hiring agreement with immediate effect.

"We are also in contact with the passenger and her husband to convey our regret at what had transpired and to render them assistance."