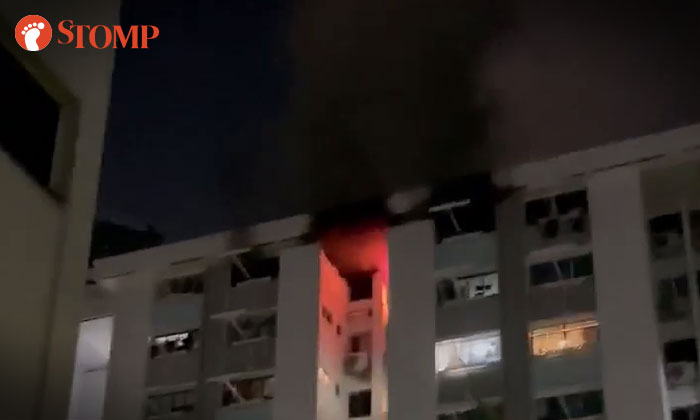 Two people were taken to hospital after a fire broke out at Block 333 Ang Mo Kio Avenue 1 on Tuesday morning (June 14).

A Stomper alerted Stomp to the incident and shared footage of flames coming from a unit near the top of the block.

Plumes of black smoke were also seen rising into the air.

In response to a Stomp query, the Singapore Civil Defence Force (SCDF) said they were alerted to the fire at 5am.

"The fire involved contents of a bedroom and living room in a unit on the eleventh floor," an SCDF spokesman said.

"One person from the unit had self-evacuated before the arrival of SCDF firefighters.

"SCDF conveyed the person to the Singapore General Hospital."

Another person from a neighbouring unit had collapsed and was taken to Tan Tock Seng Hospital.

The fire was extinguished by firefighters from Bishan Fire Station using a water jet and two compressed air foam backpacks.

About 50 people were evacuated from the neighbouring units as a precautionary measure.