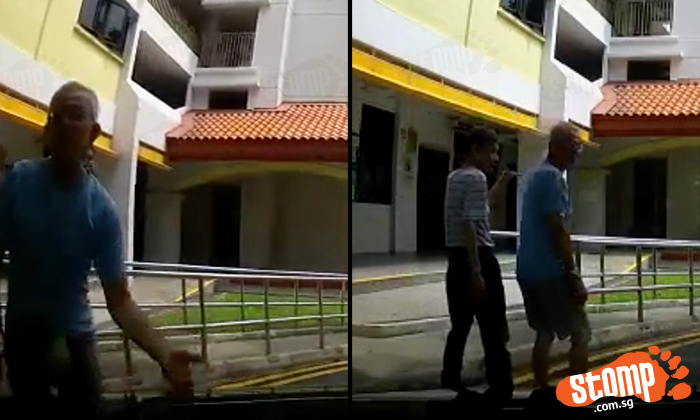 Two elderly uncles confronted Stomper S after she honked at them at the shelter between Block 319 and Block 321 Ang Mo Kio Street 31 yesterday (Jan 14).

Apparently, the two uncles had been conversing near the kerb and as they talked, slowly crept onto the edge of the road, with their backs against Stomper S’s car.

S decided to sound the horn to alert them to her presence but the uncles immediately took offence at her action, and turned to confront S instead.

One uncle even went to her car and tapped the bonnet of her vehicle.

The incident was captured on S's dashboard camera.

In the video, despite S’s son, who was also in the vehicle at the time, telling S to ignore the elderly pair and go on, the uncles were not willing to let the matter rest.

One elderly uncle kept asking S whether she had a driving licence, and was adamant that she should not have honked at them.

When S asked if there was a rule against honking at pedestrians who were occupying the road, the uncle told her that it was because the area was a residential area so she should not sound her horn.

The other uncle also told S that ‘pedestrians do not like to be honked at’ and asked her to ‘use her brain’.

The three of them continued to squabble in the background although the recording is unclear.

“I only wanted wanted to alert them to my vehicle as I was moving off and one of them even admitted that he has a hearing problem so I’m not sure why they reacted in this manner.

“This is the most unreasonable behaviour I’ve seen on the roads in my years of driving.”

However, Stompers say that the driver is also to blame in this situation.

"I was honked at this morning just when I almost reached the center divider of the entrance to Lorong Lew Lian.

"It was not necessary to honk at me and there was no risk of any accident.

"I was shaken by the loud honking and literally jumped up and nearly fell over.

"The young male driver could not care less and drove away probably enjoying the fact that I was shocked by the honk.

"At 70-years-old I could have had a heart attack. So do not blame the elderly without getting all the facts right."

Stomper Capt Chris believed that the driver should have exercised patience instead of being so quick to use her horn:

"She is a stuck up lady.

"Just because she is driving a car she thinks it gives her the right to honk at the elderly.

"It is also how u honk at them...a short honk or a long and loud honk.

"Besides, the uncles were just walking and she could also have waited for a short while to let them pass.

"It wouldn't have taken one minute to be patient.

"She is 'banyak atas" to show her arrogant status.

"Even her son told her to carry on driving BUT she insisted on arguing.

"Even if she honked at me I would tell her off if she stopped and wound down her window to look for a confrontation."

Watch their exchange in the video below.

Related Stories
Cabby 'die die' refuses to give way despite going against traffic and getting honked at -- then acts all 'self-righteous'
Watch how inconsiderate BMW driver blocks other driver's way at Punggol Central
Driver cuts across two lanes to confront cabby on AYE, holding up traffic and nearly causing accident
unreasonable
road hog
uncle