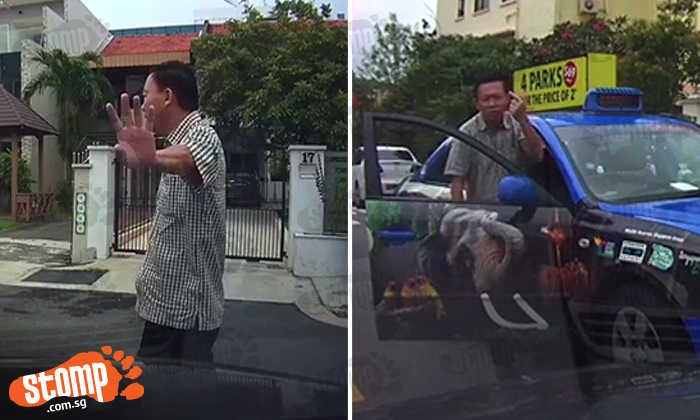 Stomper D had an unpleasant encounter with a taxi driver who refused to give way to her and her partner on a two-way lane at Quemoy Road yesterday (Oct 25).

The incident occurred at around 1.30pm and was captured on video. D had been a passenger while her partner was the driver.

The cabby had refused to move his taxi to make way for D and other drivers, despite him blocking both ends of the road and getting honked at. He was also going against traffic flow for the first lane.

D's video shows him then exiting his cab and making rude gestures at the Stomper. He also apparently complained to other people about how D and her partner should be the one to give way instead.

She also sent in a second video that shows her reversing to give way to the cabby.

D further elaborated about what happened via WhatsApp:

"We faced a self-righteous Comfort taxi driver (SHC1682P) who was driving in the opposing direction of a two-way lane at Quemoy Road yesterday (25 Oct), 1.30pm.

"We had just made a left turn and passed the stop line before seeing his vehicle. We made a stop assuming the taxi driver would return to his lane where there was ample space for him to move.

"However, he stopped right there and refused to budge even when other cars started honking at him to shift his vehicle as both sides of the road was now blocked.

"He then exited the car to make a scene, making rude and callous gestures in our direction and complaining to everyone about how he was in the right, that we should be the one moving.

"All these while, my partner and I were calmly seated in our seats.

"This may seem like a standoff between egos, but what I am unable to tolerate is this driver's blind sense of self-righteousness and badmouthing us to every passerby he saw.

"He even made the effort to come out of his vehicle a second time to complain to another taxi behind him about his difficult situation instead of simply making a swerve to his left. This guy did everything but move!

"Not wanting to hog up the traffic further, we decided to reverse our vehicle. The taxi driver then sped off gleefully without even looking back.

"A simple give and take, indeed it is, that could have easily solved the matter. Yet the driver felt he could bully others into letting him have his way? You think he felt sorry? No. He felt grateful to us for letting him pass? No. I feel ashamed and disgusted by his actions and mannerisms."

D added that she decided to share the incident as "there have been too many irresponsible drivers of late Iacking in basic road courtesy without bearing any consequences."

Related Stories
Are they both in the wrong? Woman hits taxi after cabby stops really close to her at Hougang Ave 4
Look how close this driver comes to crashing after recklessly cutting across lanes
Driver sounds horn at, chases and stops woman who made reckless turn
This is what happens when you deliberately speed up to prevent fellow motorist from overtaking
road rage
road bully
reckless
reckless driver
taxi
cabby
self-righteous cabby
refuse to give way