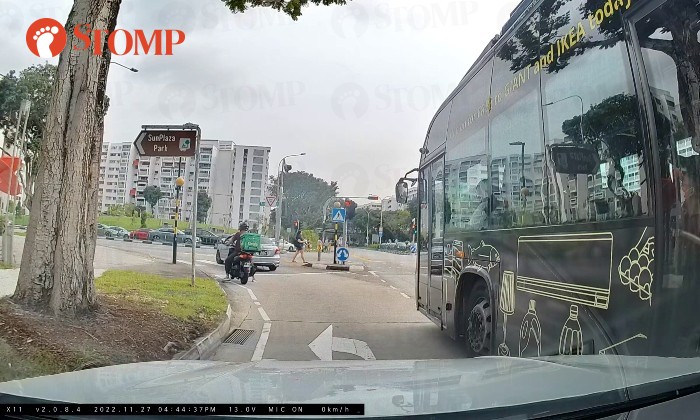 A motorist alleges that the driver of a shuttle bus to Ikea Tampines tried to "bully" the motorist into giving way to the bus driver.

Sharing dash cam videos of the incident at Tampines Avenue 5, Stomper Louis said it happened on Sunday (Nov 27) at 2.44pm.

The Stomper was driving on the leftmost lane and approaching the junction with the intention of turning left into Tampines Avenue 4.

The bus driver also wanted to turn left but was in the wrong lane.

The Stomper said: "The video shows that he was trying to accelerate past my vehicle without signalling.

"I was in my lane, travelling at a constant speed. I sounded my horn to warn him that he was moving too close to me.

"With my car positioned in the middle of the bus's length, I continued to sound my horn while he continued to close into my lane.

"It was only when I held on to my horn that he decided to give way to me."

The Stomper said that it can be seen from the videos that he was not in the bus driver's blind spot so that cannot be used as an excuse.

"It is evident that he attempted to overtake me by accelerating, which was his bad judgement. After he realised he had failed in his attempt, he then tried to 'bully' my vehicle into giving way to him.

"In doing so, he displayed a dangerous manner of driving, risking the safety of his passengers and other road users.

"The purpose of this is for deterrent measures to be taken to prevent future accidents from taking place."

The Stomper e-mailed Ikea about the incident and the company replied: "We're genuinely sorry to hear about the experience you've had with the shuttle bus. We're glad that you're safe. We've shared this feedback with the relevant team to investigate."