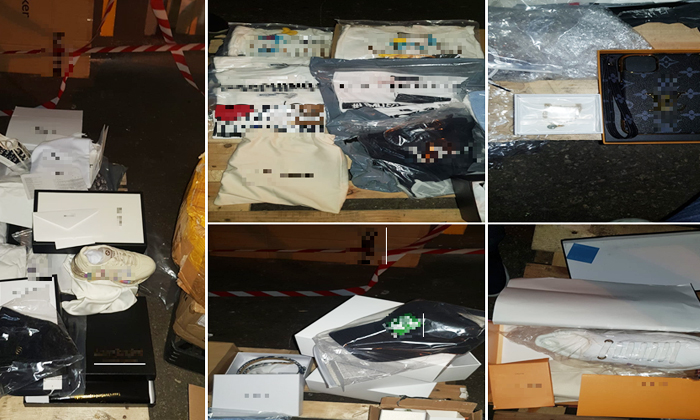 The smuggling attempt on July 16 was linked to an earlier attempt, also foiled, on June 17.

In a statement on Tuesday (Aug 11), the ICA said: "Our vigilant officers had noticed anomalies in the x-ray images of two containers at the scanning station and proceeded to unstuff them at the importers’ premises.

The detections led to the arrest of four suspects involved in the sale of the counterfeit branded goods on July 23.

The ICA added: "Our borders are our first line of defence in safeguarding Singapore’s security. The security checks are critical to our nation’s security.

"ICA will continue to conduct security checks at the checkpoints to prevent attempts to smuggle in undesirable persons, drugs, weapons, explosives and other contrabands.

"The same methods of concealment used by contraband smugglers may be used by terrorists to smuggle arms and explosives to carry out attacks in Singapore."

The police also take a serious view on intellectual property right (IPR) infringements and will not hesitate to take action against perpetrators who show blatant disregard for our IPR laws.

Those found guilty of importing, possessing or distributing goods with falsely applied trade mark for the purpose of trade may be fined up to a maximum of $100,000, or a jail term of up to five years, or both.