'Huge' monitor lizards snatch half-eaten fish from each other at Marsiling Park: 'Scary to see' 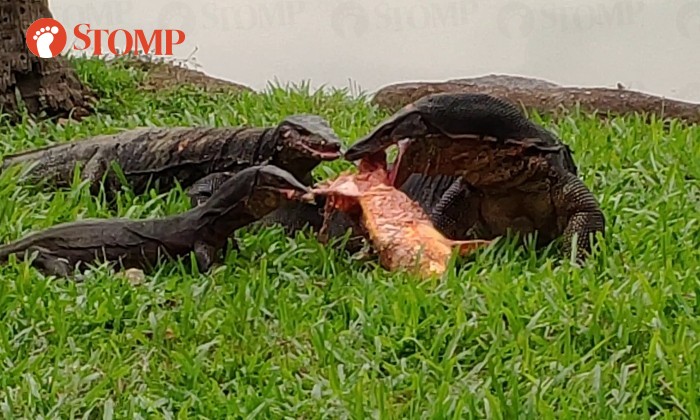 Monitor lizards were seen tussling with each other over food in Marsiling Park on Thursday (Sept 8).

Sharing a video of the reptiles, Stomper Lee said they were huge.

"It is sometimes scary to see the huge monitor lizards in Marsiling Park. There are otters and many more of the lizards in the water, hunting daily for fish," said the Stomper.

The most common monitor lizard found in Singapore is the Malayan water monitor, which can grow up to 3m long, according to the NParks website.

The video shows seven monitor lizards by the water with two of them near a half-eaten fish.

As the two started tearing in the fish, a third lizard joined in and tried to snatch the food away. The biggest of the trio quickly foiled the interloper and carried the fish carcass away from the rest with its mouth. As it was enjoying the food, another of the trio came up from behind and snatched the fish away.

Apparently, it is every monitor lizard for itself in the park once known as Woodlands Town Garden.

The area was redeveloped after Woodlands Town Garden became known for the drug and vice-related activities there.

"At night, transvestite prostitutes solicit for business at its carpark – always full with vans and lorries parked overnight – and at a bus stop next to it," reported The Straits Times in 2015. "A check of a gay online forum also shows that the park is sometimes where strangers meet up for a tryst."

After the makeover, Woodlands Town Garden was renamed Marsiling Park in 2018.

Now it seems the most unsavoury thing you can see there are monitor lizards jostling over a dead fish.

The NParks website says: "Monitor lizards feed on a huge variety of food types (eg. insects, crabs, snakes, fish, etc); they control the population of their prey, and in turn are a source of food to larger predators (eg. crocodiles).

If you encounter a monitor lizard, NParks advises: