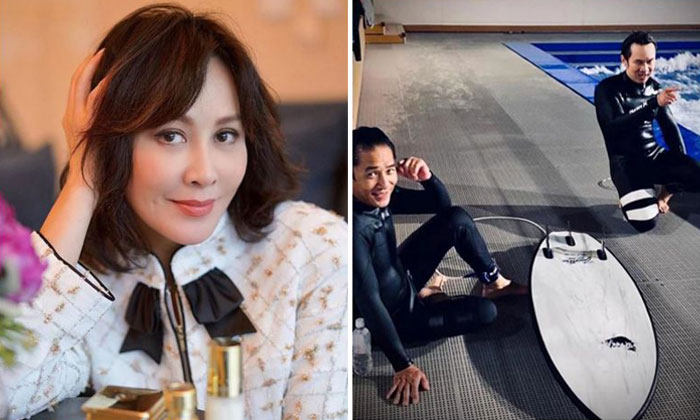 Hong Kong actress Carina Lau is a frequent user of social media, but her husband, actor Tony Leung Chiu Wai, whom she married in 2008, hardly featured in her social media posts.

On Monday (Oct 14), Lau, 53, posted two photos of Leung, 57, on Instagram and Weibo, with one of the photos showing him learning how to surf and another of him with a person believed to be his coach or teammate.

You can do it!

You can do it!

Lau, who played Chinese empress Wu Zetian in director Tsui Hark's Detective Dee films (2010 to 2018), encouraged Leung as she wrote, "You can do it!"

While a few fans commented that Leung has finally appeared in her photos, most of them praised Leung for looking cool and charming.

Leung will be making his Hollywood debut as he will be playing supervillain The Mandarin in the new Marvel movie, Shang-Chi And The Legend Of The Ten Rings, scheduled to be released in February 2021.

Related Stories
Photos of Carina Lau in swimsuit win her praise as a 'goddess who never gets old'
Carina Lau has forgiven kidnappers who took nude photos of her in 1990
More About:
entertainment
celebrity
Carina Lau
Tony Leung
celeb couple
Hong Kong