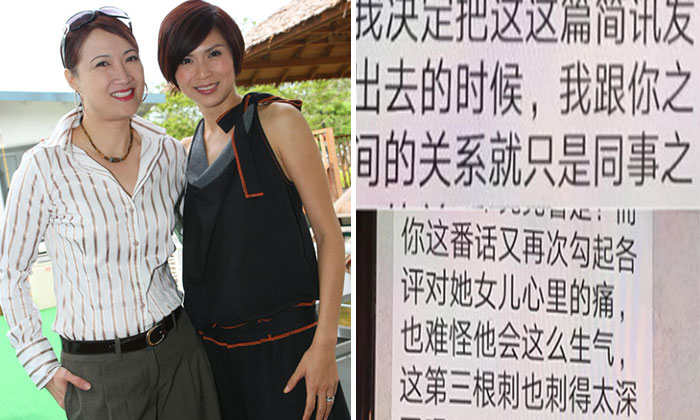 Local celebrity Hong Huifang has declared the end of her 20-year friendship with Pan Ling Ling, sending out a lengthy WhatsApp message to mutual friends which alleged that she and her family have been “bullied” by Pan.

The decision to end the relationship comes as the last resort after she finally had enough, said Hong in her message. Mutual friends, such as Vivian Lai, Chen Xiuhuan and Chen Hanwei also reportedly received the message, reports Shin Min Daily News.

“A few days ago, I woke up to a “shocking” message. The message, written by a celebrity was to denounce the friendship between her and another celebrity friend.

“At first I thought that the person had sent the message to me by accident. After I opened up the message and read the content, I was really surprised.

“Rumours and gossips can turn friends of decades into strangers.” 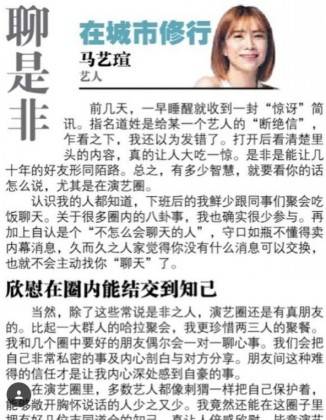 It is believed that the straw that broke the camel’s back came about a month ago, when many of the entertainment industry’s insiders gathered for a dinner.

During the dinner, Pan allegedly spoke about the private love life of Hong’s son, Calvert Tay. Concerned for her son, Hong snapped and rebuked Pan.

Hong later sent a “warning” to the group in the same day, cautioning Pan not to “blab” about Calvert.

However, Hong later heard rumours about the subject again, and sent out another message to at least 50 mutual friends within the entertainment industry. 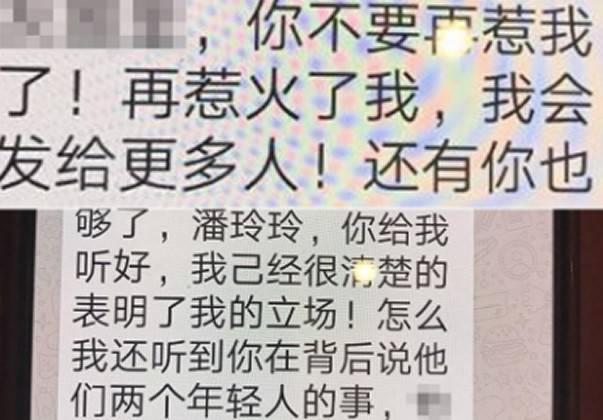 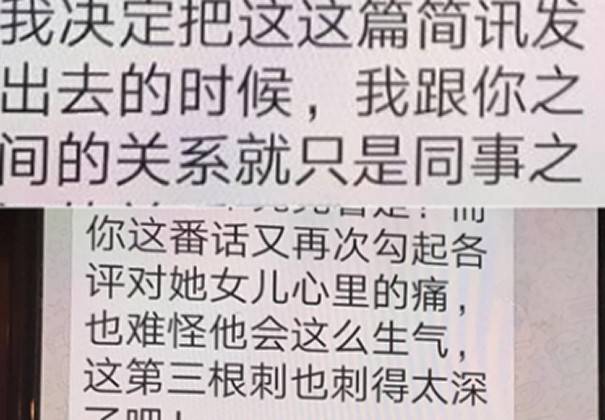 The message, which was written in Mandarin and about 1,100 words in length alleged that Pan and her husband, Huang Shinan had relationship problems over 10 years ago. During that time, the couple somehow dragged Hong and her husband, Zheng Geping into their problems.

Despite her intervention, Pan never once apologised, Hong said.

Hong also lamented that Pan had said hurtful things to her daughter, Tay Ying about her past relationship. She asserted that Tay Ying was still saddened by the things that Pan had told her. This in turn, caused grieve for Zheng Geping.

In her message, Hong also brought up Pan’s derogatory comments about her son’s rumoured relationship and her recommendation for him to get vaccines against sexually transmitted diseases.

The incident, Hong said, brought up memories of what Pan had said to Tay Ying, and led her to sever her friendship with Pan.

“From the moment I sent out this message you and I are nothing more than just colleagues!”

When Shin Min Daily News contacted Hong with regard to the message, she added coyly:

“You also know about this matter? I can only say… this has been happening for a while now.”

“The way to deal with a hypocrite isn’t to scold her or expose her.

“It’s to allow her to be, and pretend that you know nothing.

“It’s after that that others will come to you and tell you how much of a hypocrite she is.”

Responding to reports’ queries, Pan replied in a message on Sunday afternoon (July 22). The message, written in Mandarin, wrote:

“Let time water down everything.”

Pan’s husband, Huang Shinan told Lianhe Wanbao that he was worried about his wife’s health, and said that she was still on medication.

“She hasn’t talked about the incident. She is sick and currently on medication.

“I am very worried that this entire incident may affect her emotionally.”

Huang also defended his wife, saying that he did not believe that she would spread such rumours:

“Who informed the press? This person is very strange. He or she only wants to see chaos, and damage on both sides.

Mutual friends of Hong and Pan, such as Aileen Tan and Chen Xiuhuan have declined to comment on the feud.

“With regard to this incident, I don’t wish to be involved. Let them two decide how to settle this.”

Aileen Tan also said that she did wish to be involved in the pair’s matter.

Others friends such as Jin Yinji, and Dennis Chew said that they were unaware of the feud.

Jin Yinji said that both Pan and Hong had visited her home during Chinese New Year this year and she did not know that the two were embroiled in a feud.

When told about Hong's message she exclaimed:

“How can this be? This is impossible. I saw Ling Ling yesterday and she didn’t say anything. Maybe she didn’t want me to worry.”

“Both of them are so nice and understanding people. This is such a waste! I hope they will sit down and talk so they can save the friendship.”

Dennis Chew was also shocked when told about the feud.

“A few days ago, Pan still patronised my porridge stall, but she didn’t mention anything. I couldn’t tell if anything was amiss.

“I respect both of them very much. Pan is a person who seems cold on the outside but is actually very kind and passionate. If she helps someone, she will see it to the end.

“Hong is also very passionate and loyal. She always takes care of those younger than her.”

Asked if he hoped to mediate the situation, Chew confessed that it would be difficult:

“This will be hard for outsiders. We are not involved so we cannot say much.”