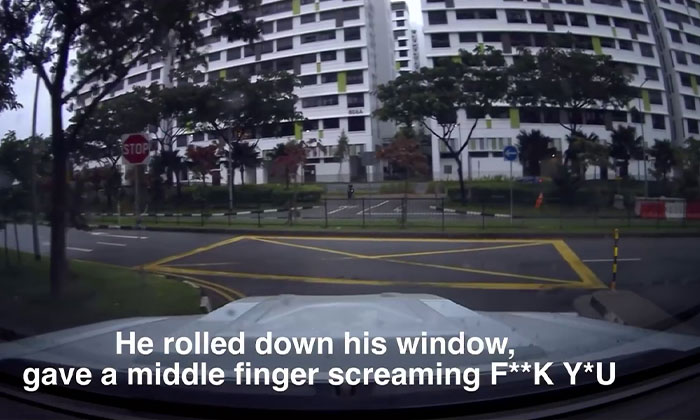 A driver had an extremely unpleasant encounter with another motorist while driving out of his HDB carpark at Tampines on Feb 24.

Facebook user Kidd Khidir shared footage from his in-car camera of a Honda Vezel driver's aggressive behaviour towards him.

He shared he was on his way out of the carpark to send his children to school when he noticed a Honda Vezel behind him.

At first there was "nothing suspicious" but as soon as he approached the carpark's exit gantry, the Honda pulled up extremely close to Khidir's car.

"He honked right when the barrier was going up," he wrote.

He said the driver then got closer and seemed "furious".

The Honda then sped up and squeezed past Khidir's car by driving in the wrong lane.

"[He] nearly collided and hit [the] right side of my car," he said.

"He rollled down his window, gave a middle finger screaming F**K Y*U.

"My children were scared, shocked and traumatized, his son kept quiet as if it's normal.

"He exit[ed] from the oncoming side and sped up screaming vulgarities again.

"I guess he woke up late and was late for work or school."

Khidir thought perhaps "something bad happened" to the other driver that morning.

"We don't know but what I know is that your anger and actions can cause [an] accident and affect other people's lives," he said.

"It's okay if you hit my car, but if there [was] a collision [and] my kids got hurt, or your kids got hurt, you will regret that action for the rest of your life.

"Better be late and safe than sorry."

At the end of the video, Khidir said the Honda Vezel driver came back to allegedly look for his car.

He urged others to be careful and if anyone knows the driver to reach out to him in case he is going through a rough time.

Related Stories
Security officer fractures palm after driver of large SUV allegedly pushes him to the ground at United Square
Driver drives car into rear of MPV, pushing it to opposite side of road
Merc driver unleashes string of profanities on deliveryman, but there's more to the story
More About:
road rage
rude
middle finger
dangerous driving