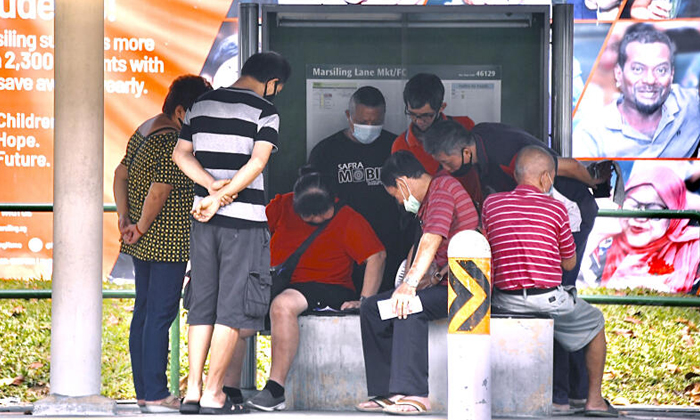 Groups of people were found to be flouting safe distancing measures after they were spotted gathering at a bus stop in Marsiling for suspected gambling activities, Chinese daily Shin Min Daily News reported.

At around 2pm on Sunday, about 40 men and women were seen gathering in groups around the bus stop near Block 20 Marsiling Lane's hawker centre, located along Admiralty Road.

Some were sitting and standing by the roadside, while others clustered in groups at an open space in front of the hawker centre, most of them glued to the screens of their mobile phones.

A bus driver, who wanted to be known only as Mr Wang, said the same groups of people have been gathering there since the start of April and would usually stay from noon to 7pm.

Mr Wang said: "It is not the first time they have gathered and flouted safe distancing regulations.

"I have reported the matter to the police twice.

"They shouldn't gather as it will increase the chances of spreading the virus."

Shin Min also reported that seven or eight people, including a woman counting notes and collecting money, were gathered at a bench.

There were some people positioned on the overhead bridge nearby who were tasked to keep an eye out for the authorities, it added.

Based on Shin Min's observations, those keeping an eye out would alert the others whenever police officers were spotted, and the group gathered at the bus stop would then disperse within a few seconds.

They would regroup if it turned out to be a false alarm.

Shin Min said there were food packages placed around the area, with some people smoking or drinking with their masks down.

Mr Wang said the gamblers have posed some inconvenience to residents in the area.

He said: "They usually gather on Wednesdays and on weekends, although it is a much smaller crowd on Wednesdays.

"Passengers waiting for buses are deprived of seats because of their actions. So all the passengers can do is wait at the side (of the bus stop).

"It is inconvenient for them."