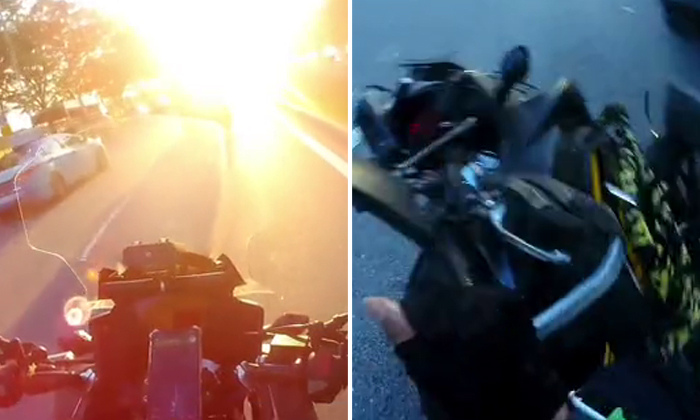 Blinded by the rays of the scorching afternoon sun, a food delivery rider crashed into a parked lorry while riding along Marina Coastal Drive some time this month (January 2022).

Thankfully, he suffered only some bruises, broken teeth and a broken finger, and is recovering from his injuries.

The GrabFood rider, who goes by Luqman Sha on TikTok, uploaded a video of his accident to his account on Jan 17.

In it, he is seen riding his motorcycle on the right lane along Marina Coastal Drive when his vision – and indeed the viewer’s vision as well – gets blinded by direct sunlight.

Moments before the collision, Luqman realises his vision is impaired and keeps a safe distance from a black van in front of him while shading his eyes from the sun.

He sees the van veering to the left as if to change lanes but has no time to figure out why before he collides with the back of an illegally parked lorry.

In his video captions, Luqman thanked the passers-by who helped him after he "passed out", and reminded people to "recite their prayers" while on the road and to pay close attention to other road users.

He also questioned why there were "three huge lorries" parked illegally on the right lane of the road.

Commenters on his TikTok video pointed out that there are often lorries parked on that stretch of road as delivery men drop off goods at the Marina South Wharves. 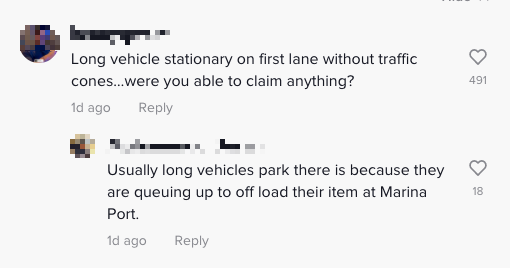 Perhaps something for LTA to look into?