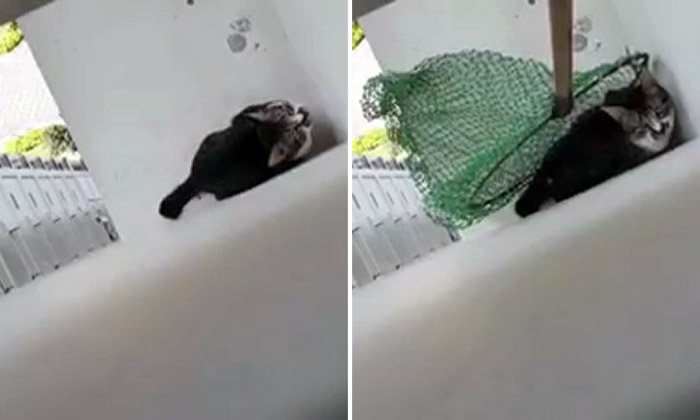 A young cat stranded 21 floors up on a ledge of a Housing Board flat in Teban Gardens was rescued in a nerve-racking rescue mission.

In a 2min 11 sec video posted to Facebook on Tuesday (Dec 20) by Cat Welfare Society (CWS) senior outreach manager Laura Ann Meranda, a cat is shown huddled on a ledge.

The rescuer, 48-year-old Richard Ng, is shown lowering a green net and gently coaxing a cat - believed to be between seven months and a year old - into it before lifting it to safety.

Ms Meranda told The Straits Times on Wednesday (Dec 21) that Mr Ng, who runs his own business transporting pets and doing humane animal trapping, had a distress call from a resident at Block 21, Teban Gardens Road, on Tuesday.

The cat is believed to belong to the resident, who lives on the 21st floor.

Said Ms Meranda: "It's believed she let her pet cat roam. The cats may actually jump onto corridor ledges, and it happened that the cat jumped onto the ledge and possibly landed on the outskirts of the platform."

The 31-year-old added that "education goes a long way" and said the cat owner asked Mr Ng where to get mesh for her windows.

Netizens commenting on the video praised Mr Ng for his rescue efforts while chastising the owner for not meshing her windows.

Mohd Eliyas said it was a "great rescue" but added that he hopes the owner would "learn to mesh up now".

Proper care of indoor cats has come into the limelight recently.

CWS on Dec 10 reaffirmed the importance of keeping pet cats indoors after one that was allowed to roam was found dead on a doorstep in Marsiling.