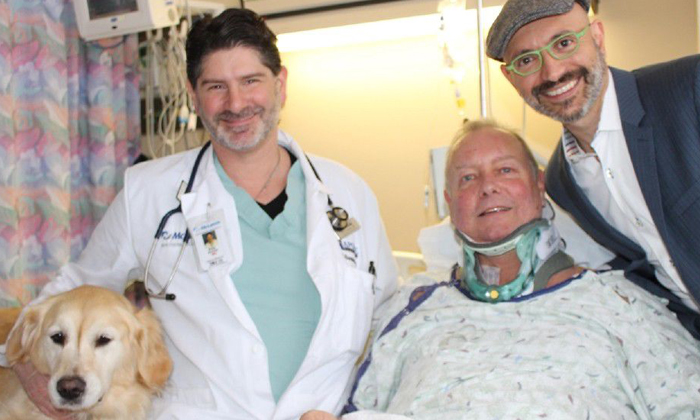 A man from Michigan, USA, discovered first-hand how much his dog cared for him after an unexpected accident left him paralysed in frigid weather on New Year's Eve last year.

According to the Petoskey News-Review, Bob had stepped out of his house during a commercial break to pick up a log for his fireplace at around 10.30pm on Dec 31.

It was a 4.5-metre walk, so he was only wearing thermal underwear, slippers and a t-shirt.

However, he slipped and fell, and broke his neck.

Unable to move or even make it to his door, he lay paralysed in temperatures as low as -4 degrees Celsius.

"I was screaming for help but my nearest neighbour is about a quarter mile (0.4km) away," said Bob.

It was then that his would-be saviour, his five-year-old golden retriever Kelsey, appeared. She lay on top of him, using her body heat to keep him warm, and constantly licked his face and hands to make sure he stayed awake.

"She kept barking for help but never left my side," said Bob.

Kelsey kept Bob warm for 20 hours, until his neighbour heard her howling and found Bob at 6.30pm on New Year’s Day.

Despite being hypothermic when he arrived at the hospital, Bob was surprised to find that he didn’t have frostbite.

Bob said: "I am sure it was because of Kelsey’s determination to keep me warm and safe."