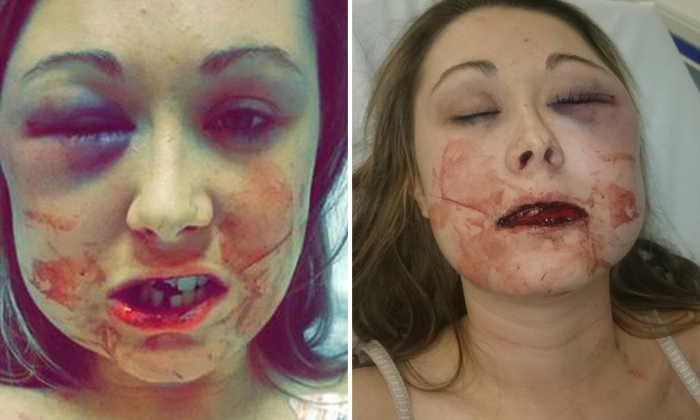 Stephanie Littlewood, a mother of one from the United Kingdom, detailed on Facebook how her boyfriend beat her up after "not wanting sex".

On the post dated Sep 21, she described how her boyfriend, Wayne Hoban, became "angry and agressive" after she turned down his advances on April 2, 2016.

She shared that he gripped her by the ankle and pulled her off the bed, then threw her on the floor and started punching her 40-50 times on the left side of her face.

The blows broke her jaw, knocked out three teeth and chipped her front tooth.

The injuries were so severe that doctors sent her for a CT scan, fearing brain damage.

She said, "Six months later and I'm still awaiting construction work on my bottom teeth. Not to mention how this has effected me emotionally."

She implored her family and friends to share her post to "warn women out there of what this monster is".

According to the post, Hoban has been sentenced to 16 months in prison.

However, Hoban's family has been reportedly been attacking Littlewood and her friends. Her friend, Shannon Meep, commented on the post saying, "I called him out and his family swarmed me with attacks on my looks and attacking my friends."

Littlewood also wrote a day later, "Wayne's(Hoban) family saying im lying and making it up for "attention" are clearly that ashamed they are making rubbish up themselves!"

She also pointed out Hoban pleaded guilty to all the facts and "what I have posted is nothing other than what I wrote in my statement because that's the truth".

Littlewood's post has since gone viral with over 290,000 shares on Facebook. Many users complained that the 16 month sentence was too lenient and applauded Littlewood for her bravery.

A GoFundMe page has also been set up for her with over 500 pounds raised.

Related Stories
Teen kicked and punched man until his nose and eye socket broke -- after trying to stop him from pulling his wife's hair
SAF regular jailed for beating up man he found in bed with 'nearly naked' wife
More About:
violent
abuse
couple
fight