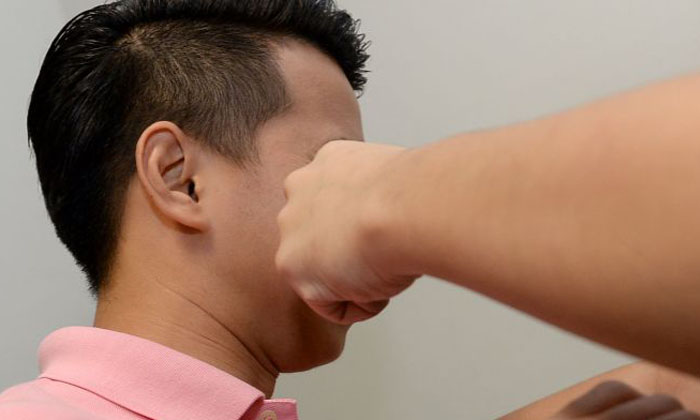 Any man who sees his wife nearly naked on their marital bed with another man would react to a certain degree.

This was the mitigation that SAF military expert Shawnald Lee Hong Heng's lawyer put forth in court yesterday.

In July last year, Lee, 25, returned home to find a man on his bed, next to his wife, who was lying shirtless in bed.

He then punched the man in the face several times because he thought the man was trying to take advantage of her.

The incident happened on July 10 at 1.30am at Lee's flat in Yishun.

Investigations revealed that around 1am, Lee's wife, Ms Tricia Wong Kai Yan, 23, had been out drinking with friends at a pub.

She was drunk and her friend, Mr Quek, took her home in a taxi. Lee arrived home at around 1.30am.

His friend, Mr Tan Jing Sheng, 25, waited for him at the void deck of the block while Lee went upstairs.

They had planned to go drinking if Ms Wong was asleep.

The court heard that when Lee entered his bedroom, he saw Mr Quek sitting on their bed, next to his "nearly naked wife" who was lying down and looking drowsy.

He presumed that Mr Quek was trying to take advantage of his wife and punched him several times.

Mr Quek did not retaliate.

Lee stopped only when his wife intervened. It was not stated in court if Lee knew Mr Quek.

Lee then went downstairs and returned to the flat with his friend to get an explanation from his wife.

When Lee saw that Mr Quek was still in his home, he tried to hit him again but Mr Tan restrained him.

Lee's wife then explained that it was a misunderstanding.

Shortly after, Mr Quek made a police report and was taken in an ambulance to Khoo Teck Puat Hospital, where he was treated for his injuries.

He said this was Lee's first brush with the law, and he had a two-year-old daughter and an elderly mother to care for.

Lee's wife has been in a drug rehabilitation centre since February this year for consuming drugs.

Mr Sinnadurai said: "When any man sees his wife on the bed with a man, to a certain degree, he will react... the emotional disturbance of seeing his wife almost naked on the bed, he just lost it."

Deputy Public Prosecutor Jason Chua said the prosecution could not confirm what Ms Wong was wearing that day.

He said Lee told his lawyer that he had seen his wife shirtless and in her panties when he walked into the bedroom.

But in the statement Lee gave the police, he only said his wife was shirtless, and her legs were covered by a blanket, said the DPP.

Mr Chua also acknowledged that while the incident was a "unique situation", probation was inappropriate.

He asked for a sentence of six to 10 weeks' jail.

For his offence, Lee could have been jailed for up to two years and fined $5,000.

District Judge Lee Poh Choo said that while she understood why Shawnald Lee Hong Heng had reacted emotionally to the scene before him, Lee had gone overboard when he severely injured the victim, whom he found sitting on his marital bed with his near-naked wife.

Judge Lee said: "Does that warrant punching the victim several times? Even after his wife intervened, he continued trying to hurt the victim."

He was given four days of medical leave and underwent surgery to repair the fractures later that month.

Earlier this year, Mr Quek also had dental implants to replace some teeth.

Judge Lee also took issue with what she perceived to be Lee's lack of remorse due to the absence of an apology or compensation to the victim.

In response, Lee's lawyer, Mr T. M. Sinnadurai, said his client had expressed regret for his actions in the mitigation and also understood the seriousness of the injury he inflicted.

But the judge said: "Words are easy to say. Has he offered compensation, especially since the victim incurred medical expenses?"

Mr Sinnadurai then revealed that Lee had earlier offered $4,000 as compensation for the victim's medical expenses.

But DPP Chua said that while Lee had been willing to make compensation to Mr Quek, no amount was stated, and there was no follow-up after.

The judge then chided Mr Sinnadurai for not knowing whether or not the compensation had been accepted.