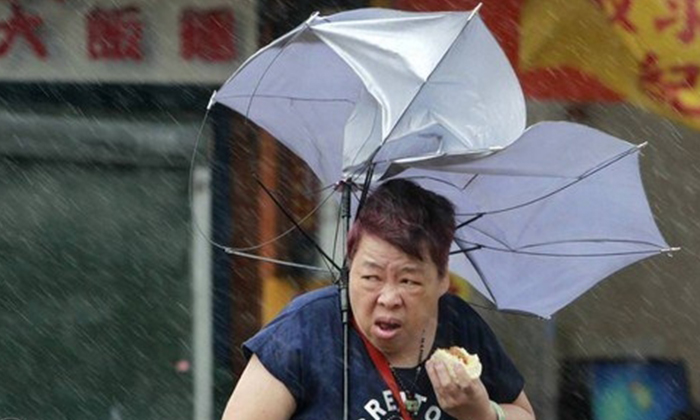 As Typhoon Megi leaves Taiwan with four people dead and over 600 injured, an unlikely internet hero has emerged.

Captured by the Associated Press photographer Chiang Ying-Ying and published on the Wall Street Journal, a photo of a Taiwanese woman "saving" her pork bun has gone viral.

The photo, which was taken near Jingmei night market, shows her with a wrecked umbrella in one hand and the glorious pork bun in another. She has a look of defiance on her face as she tries to navigate the strong winds.

the pork bun is safe in her stomach https://t.co/PdBaIGvVcT

Internet users have applauded her for her resilience against the storm and called her the "light of Taiwan". Others demanded to know which shop the pork bun was from.

When the rain comes pouring in your face, eat a pork bun. #PorkBunLady #PorkBunIsPorkFun pic.twitter.com/NHA52CIqUO

The photo sparked a local manhunt for the woman and Apple Daily. The woman, surnamed Dai and the owner of a fruit store, is not too happy that the photo has gone viral.

Dai emphasised that she was only out in the storm because she wanted to man her store, and her husband had bought her the "beloved" pork bun.

She expressed surprise and told reporters "I want to know who sneakily took the photo of me, I want to sue them."

"My son is still in school and now he's embarrassed, what do I do?"

She also hoped that the media would give publicity to her fruit store instead to help improve her business.