Cruel or did she deserve it? Alleged gangster in Brazil shaves girlfriend's hair and eyebrows for cheating 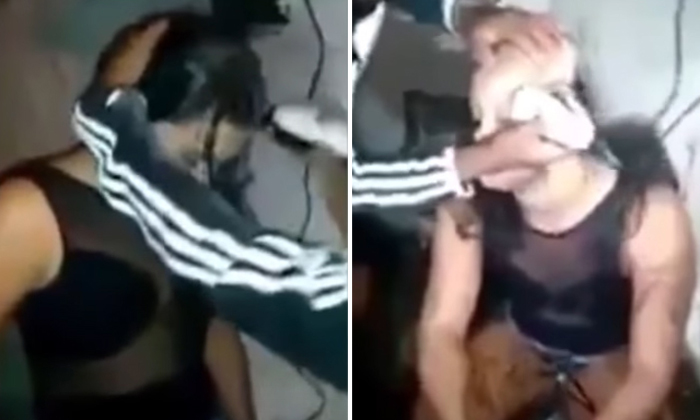 An alleged gangster in Brazil had posted a video circulating online of him shaving his girlfriend’s hair and eyebrows off as punishment for cheating on him.

In the video below, the woman dressed in shorts and a black top is seen lowering her head as a man holding a shaver begins to viciously shaves her long locks.

The woman was then forced to squat while the man continued to shave her hair, as other gang members jeered and laughed in the background.

After removing all her head hair, the man was then ordered to shave off both her eyebrows.

The video shows that the girl seems to accept her fate and makes no attempts to avoid the punishment, and even when the clipper was dangerously close to her left ear, she barely flinches.

Finally, the man then grabbed a handful of the woman's clipped, thick locks and mockingly planted it on her bald head like a wig.

The video also shows that another gang member, who is heard issuing the orders, hands her a mobile phone and orders her to make a call, believed to be to the man she cheated with.

"The video, which is supposed to act as a warning to other women, was posted online by the Brazilian drug dealing gang.

"Local experts say this type of warning punishment is common in drugs cartels across Brazil to publicly shame to anyone who breaks the rules."

Related Stories
'I fell for someone I met online but she's already attached, now I have health problems and cry myself to sleep'
This wife's revenge on husband caught cheating on Tinder is nothing short of epic
Woman shames cheating boyfriend by dumping everything he owns at work
cheating
caught cheating
unfaithful
girlfriend
boyfriend