Watch if you dare: Hundreds of head lice crawl on girl's scalp in hair-raising video 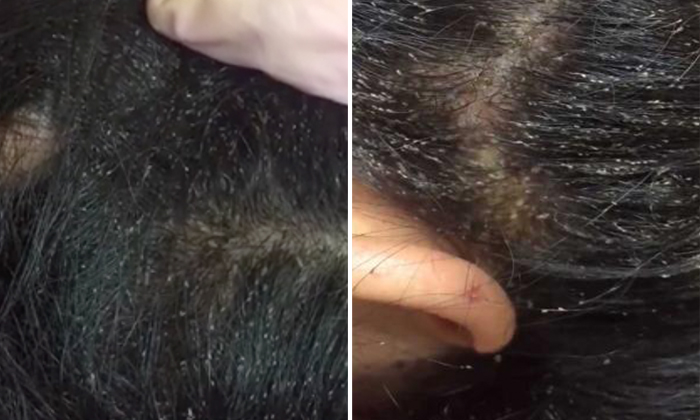 A hair-raising video that is making a viral rerun on the Internet shows hundreds of head lice crawling around a girl's head.

Hundreds of eggs and nits (egg cases) can also be seen in the three-minute video posted in Feb 2016, which has clocked over 25 million views and 275,000 shares.

Karla Mendoza, the owner of the head lice treatment salon in Mexico, described the infection as unprecedented.

Clad in gloves, Karla proceeds to part different sections of the girl's hair, only to reveal more of the blood-sucking parasite squirming around on the scalp.

These wingless insects are usually transmitted by personal contact such as the sharing of combs, brushes, caps and clothing.

Children are especially susceptible to head lice, the website added, and symptoms other than visual clues include itch and sores on the head.

According to the National Health Service (NHS) in England, dimeticone 4 per cent lotion or spray, which can be bought at the pharmacy, can be applied to the scalp and hair to kill the head lice.

Another treatment method to remove the head lice is through a special fine-toothed comb, with the flat-faced comb teeth spaced 0.2-0.3mm apart.

Contrary to popular belief, there is no need to wash the infected person's bedsheets and clothing in hot water as it is likely to be ineffective, NHS said.

Herbal remedies, tree and plant oil treatments such as tea tree oil, eucalyptus oil, and lavender oil, and head lice "repellents" are also not recommended due to their ineffectiveness.