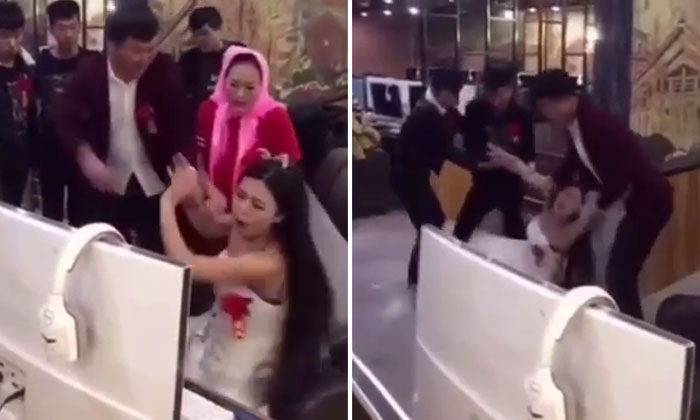 This gamer bride was so hooked on to playing League of Legends, she refused to leave her computer to get married -- despite her in-laws and fiance's pleas to do so.

And she sure looked the part with her white wedding gown and hair and make-up all done, but as seen from the video, the games sure seems way more important to her than getting hitched.

According to a report by The Coverage, the wife-to-be was glued to the screen of the computer where she was found in the midst of an intense battle with her opponents in League of Legends. Her husband and in-laws were inside the internet cafe begging her to leave, but the woman told them to 'wait a minute'.

A woman who appears to be the bride’s future mother-in-law can be heard screaming: “Come now, child, we have to go.”

And her groom is seen to be even more anxious, shouting: “The ceremony is happening soon.”

But in a further bizarre moment, the groom is slapped in the face by his own dad, who says: “What’s wrong with you? You can’t even control your own wife. Now drag her out of here.”

The groom then yells: “Please, my wife, I beg you, come with me,” after which he and two of his friends physically drag her from her chair and pull her away from the computer.

However, there have been claims that the video, which has gone viral in China, may have been staged.

Related Stories
Bride loses 50 kg in 15 months after being embarrassed by engagement photos
I do, but hold on: Groom leaves bride standing at altar after 'forgetting wedding rings'
Hilariously awkward prom photos that should not be allowed to exist
funny
China
unusual
gaming
marriage
bride
groom
bizarre