I do, but hold on: Groom leaves bride standing at altar after 'forgetting wedding rings' 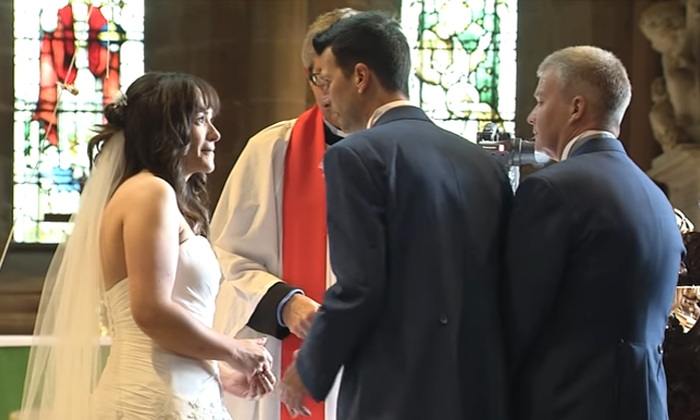 What could possibly go wrong on your wedding day?

A wedding ceremony in England was going smoothly for groom Stuart and bride Vicky, until the exchange of rings.

In the YouTube video below, the groom is seen telling the vicar of the ceremony that he has probably left the wedding rings at home.

The vicar, who agreed to be in on the prank, then told the groom that he better get home to get the rings.

Guests watched in shock and horror as Stuart left Vicky and his best man Robert alone at the altar.

As soon as Stuart disappeared, a screen dropped down and revealed a pre-recorded video of the groom on his epic journey to retrieve the rings at home.

The video shows Stuart embarking on a tractor ride, making his way through a field of sheep, riding on a pogo stick and more — only to realise he forgot his house keys at the front door.

According to Little Things, Stuart and his brother Robert are always playing pranks on one another, and when Stuart and Vicky got engaged, Stuart knew he wanted to pull an ultimate prank on his wife-to-be and his brother.

Everyone including the bride-to-be had a feeling Stuart would do something sneaky on his wedding day, but no one had any clue when it would happen or that Stuart would go to the lengths he did.

The wedding guests went from worried to hysterically laughing.

And no, the bride was not mad, and yes, the best man really fell for it.

Please enjoy this unconventional wedding surprise, and to all grooms-to-be, maybe you will feel inspired to try this at your wedding!

Related Stories
Falling for each other: Couple takes a tumble after saying "I do"
Chinese couple exchange golden pythons in bizarre wedding ceremony
You won't believe what this guy used to make exquisite looking wedding ring
Wedding
funny
prank