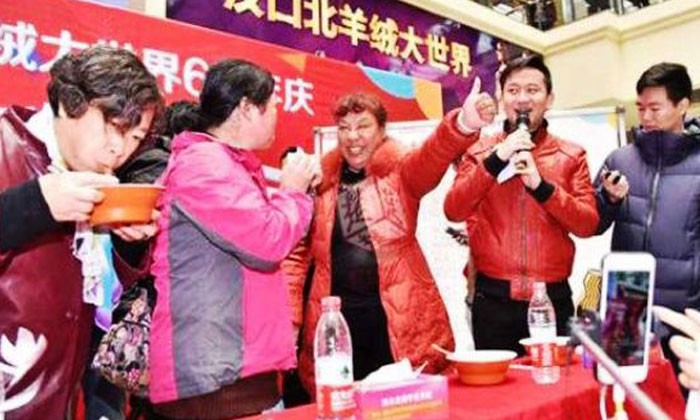 China is always eager to share its culture with new friends from abroad but at the same time, minces few words when deciding who is best at its culture, just like in ping pong, kung fu and in this case, Chinese food.

According to Shanghaiist, a woman in Wuhan beat a roster of 100 international competitors by wolfing down 400 grams of noodles in just 8 seconds -- beating an older record of 24 seconds.

The 53-year-old woman surnamed Luo apparently was not originally a competitor but had been invited on stage at the end of the competition.

Just like anyone else, Luo was surprised at her win but she still told a cheering crowd, "When it comes to eating (local delicacy) hot dry noodles, Wuhan people are the best."

Luo's appearance seemed to have run against the whole purpose of this competition which is to be act as a cultural exchange to allow foreign exchange students to understand Wuhan.

The competition also allowed locals to laugh at the foreign guests and according to Chinese reports, the audience snickered at foreign competitors who ate using their hands instead of chopsticks because they were "unfamiliar with the use".

However, a 21-year-old Emmanuel came in first and won the top prize of 1,000 yuan by eating with his hand.

He told the crowd in Chinese, "Hot dry noodles; so delicious!"

Related Stories
Hunk who wolfed down 4kg of chicken rice is a personal trainer
Chinese man is forced to strip on the streets after his phone explodes in his pocket
The latest China food scandal will leave you bewildered: Shrimp pumped with gelatin
China
eating competition
noodles
food