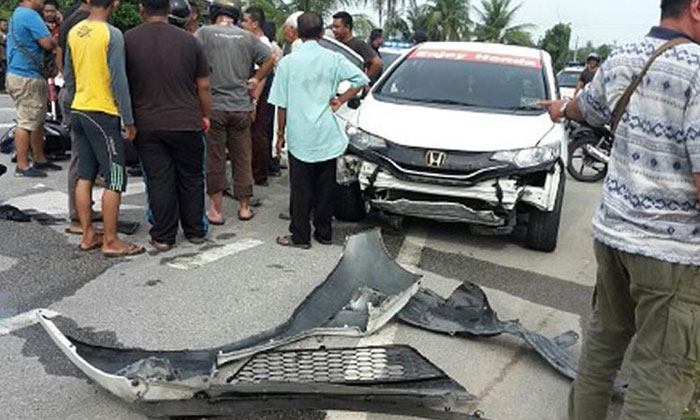 A band of robbers picked the wrong man to mess with yesterday.

He gave chase and rammed three of their motorcycles with his car.

Mr Mohamed Mazis Mohamed Mokhtar, 25, was with his wife Atiqah Nordin, 25, and three friends in Taman Murni at 10.15am when they were set upon by four men.

One man, who was armed with a parang, placed the weapon on Ms Atiqah's neck and demanded they hand over all their valuables.

When the victims stood their ground, the robbers became enraged and a fight broke out.

Mr Mazis said one of his friends was slashed on the head with a parang.

"The robbers managed to grab a bracelet, a couple of gold rings, two handbags and two wristwatches before fleeing on four motorcycles," he said.

Mr Mazis, however, was not about to let them go without a fight.

He got into his car and gave chase before ramming three of the four motorcycles at a junction.

Passers-by, seeing the commotion, gave their support and together with Mr Mazis, apprehended the men.

Related Stories
Bangkok tuk tuk driver appears to be 'signalling' before tourists get robbed by motorcyclist
Police on islandwide hunt for suspected robber who made away with $20,000 from Standard Chartered bank at Holland Village
rob
crime
Malaysia
accident
unusual
road