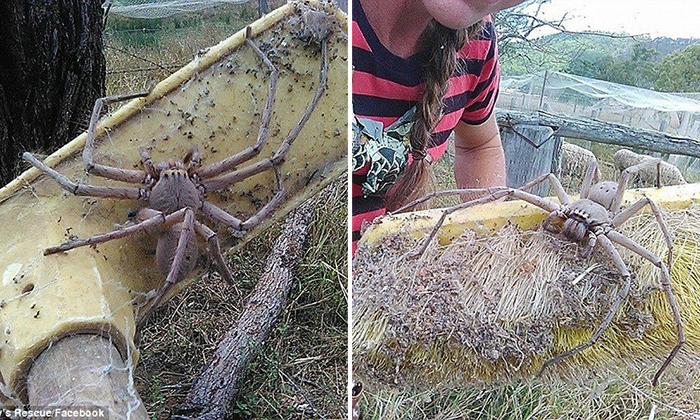 If you've ever needed proof that Australia has the world's weirdest creatures, here's a strong contender to add to the list of hair-raising abominations.

Photographs of the arachnid crawling on a broom first emerged in October last year but resurfaced again on social media this week where they've gone viral, reported Daily Mail.

In the original Facebook post on Oct 20 last year, Barnyard Betty's Rescue said that Charlotte was "very real and very large and not Photoshopped!".

"She was a beautiful, calm spider, not aggressive in any way and like most spiders she just wanted to go about her business eating bugs and living in peace."

The post urged readers to look past their phobia to see what an "amazing creature" the spider was.

Sometimes the Internet refuses to let things go, and in this case, the giant spider came back to scare arachnophobes,

The photos were shared by Australian TV station 9 News Perth on Thursday (Nov 3) afternoon on Facebook with the caption: "Could this be the biggest Huntsman spider photographed in Australia?"

Who knows? It could well be, but whatever the case, it seems to have sparked arachnophobia among netizens who openly voiced their fear of spiders, particularly for this larger-than-life one.

Another user Mandy Gloss posted: "Sell the farm. In fact, just leave. Go to Antarctica. Stay there peacefully with no nightmare creatures."

The good news is that the bite of a Huntsman spider isn't dangerous to humans even if it does look much like the tarantula, which has earned a bad reputation thanks to Hollywood productions.

It seems like Charlotte isn't the only eight-legged creepy-crawly from Queensland, Australia, that's made the news in recent weeks.

On Oct 23, a video filmed by Jason Womal in the same territory showed a Huntsman spider (affectionately called Hermie) carrying a mouse up a fridge.