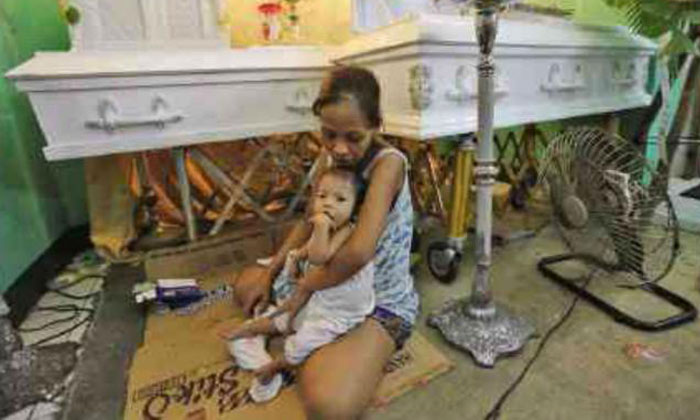 A five-year-old boy and his father, an Oplan Tokhang surrenderer, died after a gunman fired through the closed window of their shanty in Pasay City over the weekend.

The deaths happened in the same area where, in July, another drug user was killed vigilante-style and whose Pieta-like photo became symbolic of President Duterte's bloody antidrug campaign, with mostly the poor ending up in body bags.

"I hope the killer grows a conscience. Even my innocent child got caught up in this," Elizabeth Navarro, 29, told the Inquirer on Wednesday after losing her partner Domingo Mañosca and their son Francis.

She is due to give birth to their fifth child this month.

Before dawn on Sunday, Navarro said, Mañosca was up fixing a DVD player when someone knocked on the plywood window of their home on Mahogany Street, Barangay Sto. Niño.

When Mañosca asked who it was, the gunman fired through the panel, apparently after sensing his target's position through his voice.

But the shot instead hit Francis who was sleeping on the floor of the tiny room along with his mother and two other siblings.

The boy was hit in the forehead.

A second shot hit the elder Mañosca in the nape, the bullet exiting through his cheek.

Navarro said a man wearing a jacket, a bonnet and a cap was seen fleeing on foot through the narrow Mahogany Street.

"Maybe (Domingo) shouldn't have surrendered. It's as if they're targeting those who did," she said, noting that no rehabilitation programme was given to Tokhang surrenderers.

"He was also a victim of drugs. They should be focusing on those who manufacture and sell illegal drugs," she added.

Domingo's mother, Maria Lusabia, 68, said the family had no means to pay for the funeral expenses amounting to P45,000.

The wake for the slain father and son is being held at the same barangay hall where the funeral vigil for another pedicab driver, Michael Siaron, was held in July.

A shot taken by Inquirer photographer Raffy Lerma, showing Siaron's body cradled by his grieving partner on the street, became viral and emblematic of the anguish brought about by the government's war on drugs.

"We can't do anything. We will just leave it up to God," a tearful Navarro said.

Two chicks were placed on Francis' casket, a funeral custom meant to prick the conscience of the killer.