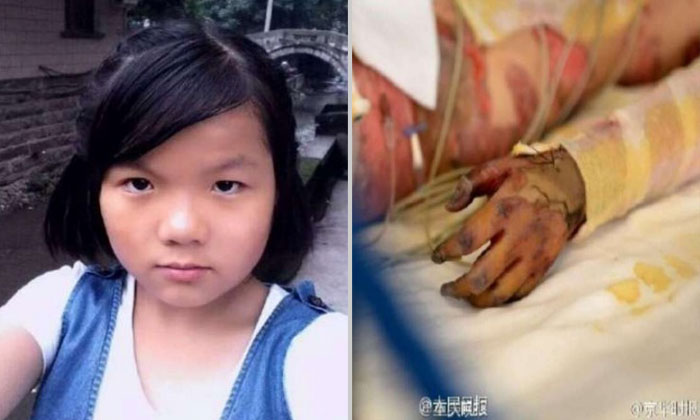 A 14-year-old girl suffered nearly 80 per cent burns on her body after dashing back into her burning house in south-western China to look for her father on Saturday (Dec 3), and may need to have both her hands amputated.

Her father Guo Hongyong had already fled the apartment in Chongqing's Shapingba district, but also went back into the house to look for her, when she was nowhere in sight. Guo Jiajia was later found unconscious on the floor with her clothes and fingers badly burnt.

At about 3am on Saturday, the lights and electrical appliances in their living room started exploding, the girl's mother, Ms Lai Rongqing, told Chinese news site Southcn.com in a report on Monday (Dec 5).

Ms Lai immediately woke her mother, husband and daughter up and asked them to flee, while she ran downstairs to turn off the electrical and gas mains.

She told Southcn.com that the living room was already on fire by then.

"When I left, my husband was putting on his pants, my daughter and mother had already woken up. My daughter's room was nearest to the main door," she said.

Ms Lai added that she saw her daughter at the main door, but the latter disappeared after Ms Lai went to alert neighbours about the fire.

As the neighbours rushed to put out the fire, Ms Lai continued searching for her daughter. She spotted Jiajia lying on the floor by a liquor cabinet facing a bedroom.

Her husband dashed in to save their daughter.

Said Mr Guo: "The smoke was too dense, I couldn't see anything, and could only feel my way around on the floor."

He soon started choking on the smoke, and suffered burns to both his hands and head, but managed to rescue his daughter on a second attempt.

Jiajia's clothes were almost completely burnt, and her fingers were burnt black.

She regained consciousness only when her mother splashed water on her.

Ms Lai asked: "You came out already, why did you go back in?"

Jiajia said: "I went in to look for dad, but I didn't find him."

Mr Guo was injured in a traffic accident in 2010 which left him less mobile.

Firefighters arrived at the scene shortly and put out the blaze. The authorities are investigating the cause of the fire.

Jiajia's doctor said the teenager suffered burns to 79 per cent of her body.

"There is a high chance that her hands have to be amputated. She would also need to undergo more operations in time to come, and the entire treatment is likely to cost more than one million yuan (S$207,000) ," Dr Zhang Xiaohong said.

Donations for Jiajia from the public have started pouring in, and over 205,000 yuan had been collected by Monday morning.