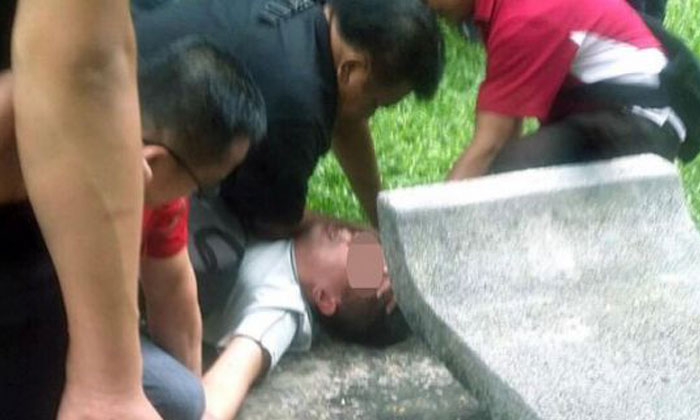 A man who allegedly took an upskirt video of a woman was arrested near Toa Payoh MRT station on Wednesday (Nov 16).

A woman in her 20s shouted for help while standing at exit C of the MRT station on Wednesday afternoon, Shin Min Daily News reported.

She was pointing at a middle-aged man while she screamed, and four men came forward to restrain him, the Chinese evening daily said.

A witness, surnamed Lim, told the paper that she saw the man struggle to escape.

"A woman in a blue dress came up to them, and I heard that the man was trying to take an upskirt video of her," she said.

Another witness said that the woman sat on a bench nearby, and was shivering and crying. She later called the police.

The four men pressed the man on the ground until the police arrived.

Police said they were alerted to a case of public nuisance at Block 175, Toa Payoh Lorong 2 at 2.25pm.

Related Stories
Sec school students take and share upskirt photos and videos of 6 teachers: One expelled, several others caned
Man jailed 24 weeks for taking upskirt videos and clips of women relieving themselves in toilets
Teacher whose students took upskirt photos and videos of her: 'I still have an aching pain in my heart'
upskirt
crime
arrest
court
illegal
police
MRT