First responders who fought 30m towering inferno at Jalan Buroh: "It felt like an earthquake" 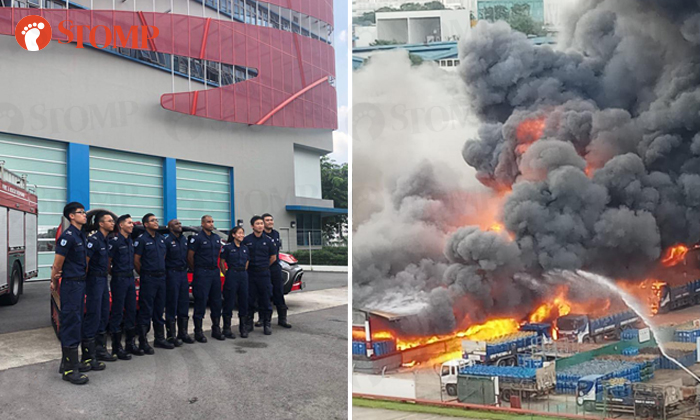 A fire that broke out on Friday (June 21) at Summit Gas Systems' Liquefied Petroleum Gas (LPG) facility in Jalan Buroh turned out to be the largest LPG fire the Singapore Civil Defence Force (SCDF) has ever fought.

The SCDF was alerted to the fire at about 5pm and took about six hours to put out. One worker died and two were injured.

Serving his National Service, 20-year-old Lance Corporal Muhammad Fazlan Rozali shares that the fire was quite an experience for him.

As one of the first SCDF officers to arrive on the scene, Rozali told Stomp: "When the call came, and I heard the phrase 'fire large', it caught my attention. I could see thick smoke from our fire post. We could see the cylinders flying everywhere at the scene and the ground was shaking. It felt like an earthquake."

Lieutenant Tan Chun Hui, Rota Commander at Jurong Fire Station, was the first duty officer to arrive at the scene and recalls being greeted by a towering inferno about 30 metres high.

Tan remembers the flaming cylinders flying around everywhere and said that her priority was to prevent fire from igniting in neighbouring premises, which included a facility that held flammable material.

The nine firefighters shared a common memory: the sound of hissing.

Yazid said: "When we hear hissing, we know a cylinder is about to explode so we would standby. After it explodes, we continue working."

Commander of Jurong Fire Station, Captain Dinesh Verlachamy told Stomp in an interview: "I could hear explosions while on the way to the scene. The minute I came out of my vehicle, I could see cylinders shooting across like missiles - it was like a Hollywood movie action scene.

"The sheer scale of the fire was immense, it was nothing we've ever seen."

In 2018, Commander of Bukit Batok Fire Station, 37-year-old Major Navin Balakrishnan went to the facility of Summit Gas Systems to engage in an exercise.

He was familiar with the facility and was concerned about the two 60-metric tonnes tanks that sat at the back of the premises.

Balakrishnan said: "What was on my mind was that if this goes off, what you will have is fire cascading down further. As wild as your imagination can run, that's how wild the fire would run."

Before compromising on anyone's safety, Balakrishnan went in alone to check the condition of the tanks and was relieved to find that they were cool enough.

He said: "When I entered, the distinct sound of hissing was everywhere. You don't know where the next potential projectile will land. Despite inherent risks, we all took safety precautions. I had to ensure the safety of my guys and not expose them to unnecessary risk.

"As a leader, if I can't go in, how can I send my men in? If I can show them I'm there and lead from the front, I can give them confidence and better advise them as well."

At about 7.30pm, the firefighters brought the fire under control.

As a protective measure, the SCDF has been providing assistance to check the facility for hot spots and gas leaks.

Balakrishnan added: "It was nice to see everyone looking at one another saying "good job". We went as a force and came back together as one."