1 dead, 2 injured after fire breaks out at LPG facility in Jalan Buroh 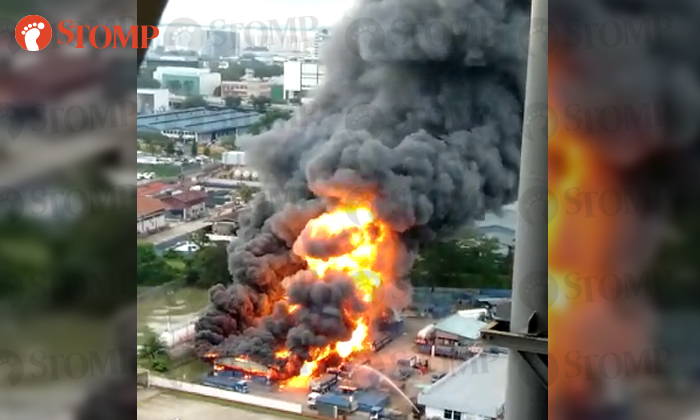 A massive fire broke out at a liquefied petroleum gas (LPG) facility in Jurong on Friday (June 21), killing one and leaving two workers with burn injuries.

In a Facebook post, the Singapore Civil Defence Force (SCDF) said it was alerted to the fire at 43 Jalan Buroh at around 5.10pm.

The fire, which involved hundreds of highly flammable LPG cylinders of various sizes, spread rapidly and engulfed the facility, which was about two football fields in size.

Several Stompers contributed videos that show the building engulfed in bright orange flames and thick smoke at the scene.

"The sky looked like it had been stained black because of the thick smoke."

The SCDF said it immediately deployed resources around the affected area to contain the fire.

"Firefighters faced intense heat amidst exploding LPG cylinders while preventing the fire from spreading to larger LPG storage tanks nearby," added the SCDF.

"Despite the challenges involved, firefighters persevered and fought the blaze into the night."

A body was found and pronounced dead at the scene by an SCDF paramedic.

A total of 35 emergency vehicles and about 120 firefighters were deployed.

At the height of the firefighting operations, seven water jets, including an Unmanned Firefighting Machine, were used to mitigate the fire.

The fire was under control at 7.30pm and its cause is under investigation.