Fire breaks out at stall in Circuit Road hawker centre 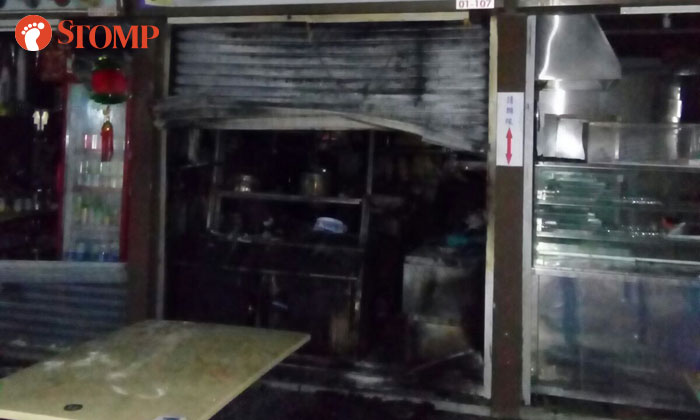 A fire broke out at a food stall in a hawker centre at Circuit Road early this morning (Mar 8).

Stomper H alerted Stomp to the incident when he had gone to the hawker centre to have breakfast at around 5am.

"There were fire engines and police cars in the area," he said.

"I talked to the stall owners there who are my buddies on what happened.

According to the Stomper, the fire started at the duck and chicken rice stall.

He said that the owner of the economic beehoon stall behind the burnt stall arrived at the centre to open his stall at 2.30am.

After noticing the fire, he called the police.

"He was affected as the power supply to his stall had been cut," said H.

In response to a Stomp media query, the Singapore Civil Defence Force (SCDF) said it responded to the fire incident at 89 Circuit Road at about 2.50am

"The fire involving contents of a food stall was extinguished by SCDF using one water jet and two compressed air-foam backpacks," a spokesman said.