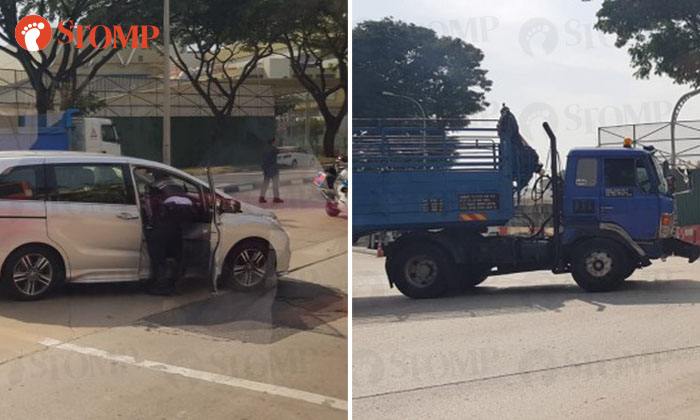 A 59-year-old woman was sent to hospital after her car collided with a blue trailer along Tuas South Avenue 3 yesterday (Oct 4).

Stomper Ramli shared the incident with Stomp and said: "I was in the bus service 182 heading towards Tuas Link when I saw the accident."

He immediately took out his phone and snapped photos of the scene.

In response to a Stomp query, the police said: "On Oct 4 at 2.41pm, the police were alerted to an accident involving a car and a trailer along Tuas South Avenue 3.

The car driver, a 59-year-old woman, was conscious when conveyed to Ng Teng Fong General Hospital."

Stomp understands that the trailer driver was making an illegal U-turn at the T-junction of the road.

The car was on the most right of the three lanes of the road and was hit on her left by the trailer.

It is unclear whether the car was stationary.