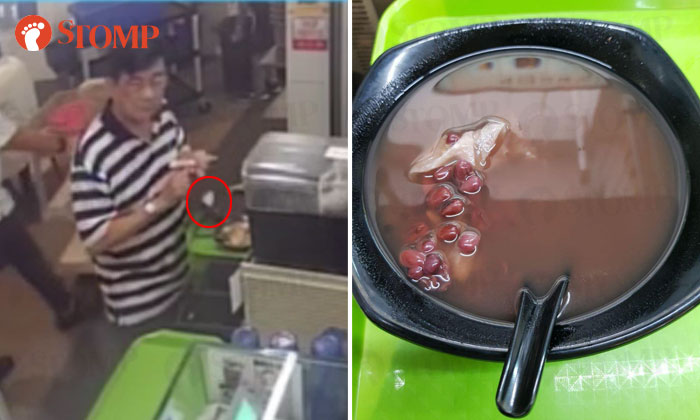 A dessert stall operator shared with Stomp CCTV footage of what actually happened after a family claimed to have found a piece of wet tissue in a bowl of red bean soup bought at Bukit Panjang Hawker Centre.

Stomper Adeline told Stomp that her dad had ordered three bowls of dessert from the stall on Saturday afternoon (Sep 7).

"To our dismay, the red bean soup actually came with a piece of wet wipe soaking in the bowl," she said.

"It was quite a big piece.

"I've never seen such a thing before."

Adeline said that her father then proceeded to bring the bowl back to the stall to bring it to their attention.

"He requested another bowl of dessert as he feared that the whole pot of red bean soup might have been contaminated.

"However, the stall attendant didn't even apologise and just gave my dad his $1.70 back and shooed him away."

Stall operator Li Wei told Stomp that he checked his CCTV records after the incident and discovered that the Stomper's father had dropped the tissue into the bowl of red bean soup while waiting for his other orders to be prepared.

"I hope that you can clarify this as it has affected my business reputation," he said.

"The video serves as clear evidence that the customer dropped the piece of wet tissue in himself."