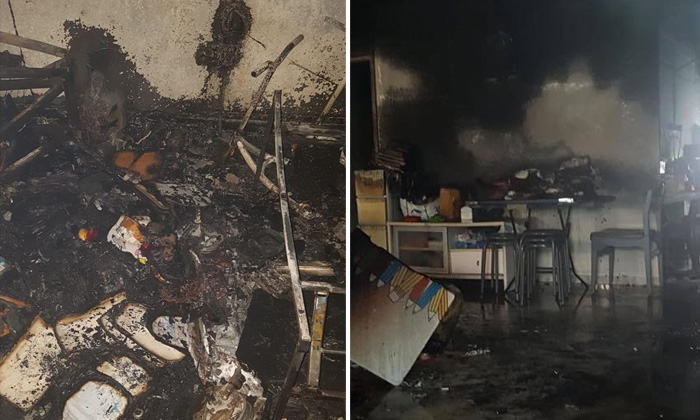 An elderly woman was taken to hospital after the battery pack on a Personal Mobility Device (PMD) caught fire in a flat at Block 240 Tampines Street 21 at about 5.15pm yesterday (Oct 9).

The woman, who was in a neighbouring unit, was conveyed to Singapore General Hospital (SGH) for smoke inhalation.

The fire originated from the battery pack of the PMD which was left charging in the living room.

In a Facebook post, the Singapore Civil Defence Force (SCDF) said: "At about 5.15pm, SCDF responded to a fire at a 10th floor unit of block 240, Tampines Street 21.

"The fire involved a PMD that was left charging in the living room and was extinguished by SCDF using a compressed air foam backpack.

"A water jet was later used for damping down."

SCDF clarified that "damping down" is a term they use to describe the application of water to wet burnt surfaces immediately after the fire is put out to prevent any rekindling of flames.

The Facebook post also advised owners of PMDs about the precautions they should take when charging their PMDs in order to prevent a fire.