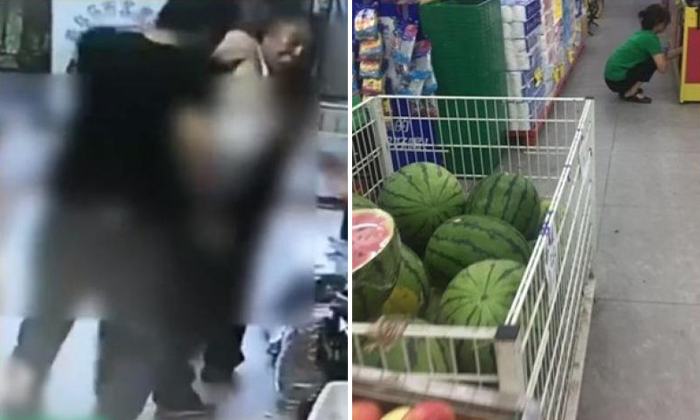 Upset over their 'rotten' watermelon, a couple in their 70s returned to a supermarket in China and kicked up a ruckus -- only to end up being fatally stabbed by a 45-year-old employee who later killed himself.

According to Shin Min Daily News, the incident occurred in Qinhuangdao, Hebei province, on Sep 1 at around 6pm.

The elderly couple were unhappy with a watermelon that they had purchased earlier that day and went back to the supermarket to make a scene.

However, the couple remained dissatisfied and insisted on a compensation of 10,000 yuan (around S$2,000).

Both parties got into a dispute.

Enraged, Zhao picked up a knife and rushed towards the couple, stabbing them over 10 times in total. The two died at the scene.

Zhao then fled and was found dead 19 hours after the incident, having killed himself.

Residents in the area revealed that Zhao was an extremely honest person who was well-loved by his customers, as he treated them with warmth.

However, beneath his cheerful facade, he was actually facing enormous financial pressure.

Zhao, whose monthly salary was 3,000 yuan (around S$600), had one son and one daughter, whom he supported all on his own.

"Where would he find the money to compensate 10,000 yuan?" a source was quoted as saying.

Neighbours also shared that the deceased couple came from a wealthy background and owned property. However, they were reportedly calculative by nature and often argued with people over minor matters.

Another source who was familiar with the incident said that Zhao had called the police for help, but they did not arrive in time.

The police confirmed that Zhao had made a report that day, but did not reveal the time or further details.