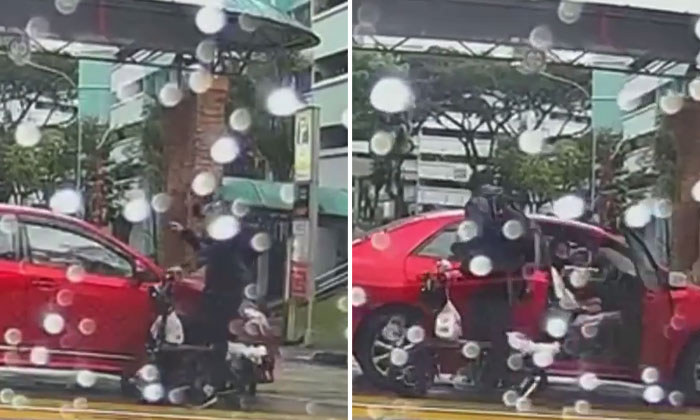 An e-bike rider was caught on video slamming a car and pulling the driver's door open after getting honked at along Serangoon Avenue 3.

2mar2022 serangoon ave 3 #pab #ebike #N582 without helmet upset at being horned by red car & road rage quoted I hardly post up such things but this deserve some justice, uncle (in red car) horn at the e bike for cutting across dangerously, but this young man reacted violently, just watch the video. Summary, the young man opened the car door and threaten to beat the uncle up. After the incident, I tried to get uncle’s attention, ended up we met up when he finally stop at his relative’s house, he was visibly very shaken, and tears were forming in his eyes, told uncle that I had the footage and will assist him, passed uncle and his relative the footage, and uncle mentioned something dropped, guess what? It’s the license plate of the ebike. Went back to collect it and snap a photo of it. As an athlete and educator, one thing I can’t stand is bullying cases like this, esp towards the elderly. And we have been teaching others to be an upstander, should the situation escalated further, I would no doubt step in to assist. https://youtu.be/FDyUAQE77PY

According to the caption, it happened on Wednesday (Mar 2).

The video's contributor said the car driver had honked at the rider for "cutting across dangerously".

"The young man opened the car door and threaten[ed] to beat the uncle up," he said.

He added that he caught up with the elderly driver who was visibly shaken and had tears in his eyes following the encounter.

He has since shared the footage with the driver.

"As an athlete and educator, one thing I can't stand is bullying cases like this, [especially] towards the elderly," he said.

Related Stories
Honda driver honks at car exiting Tampines carpark, flashes middle finger and shouts "f*** you!"
Security officer fractures palm after driver of large SUV allegedly pushes him to the ground at United Square
Driver drives car into rear of MPV, pushing it to opposite side of road
More About:
road rage
e-bike
serangoon