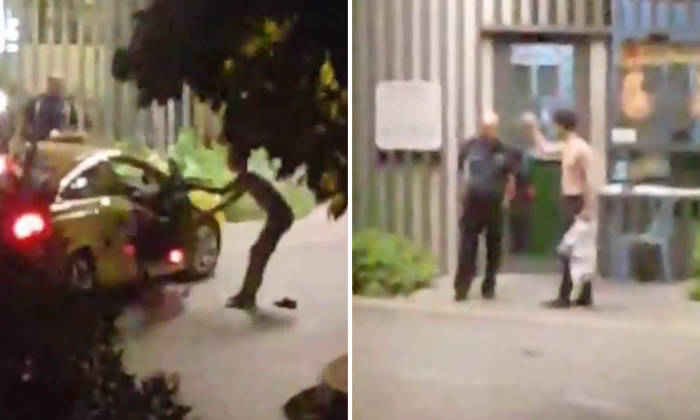 A man who was caught on camera behaving aggressively towards a taxi driver, security personnel and police officers was sentenced to four weeks in jail and fined $5,000.

Li Yaojie, 40, pleaded guilty on Monday (Sep 10) to one count of voluntarily causing hurt to cabby Mr Chen Wenyou and one count of using abusive language against a public servant.

The incident occurred on Oct 12, 2017, at Blossom Residences, a condominium located along Segar Road in Bukit Panjang.

Police told Stomp that they received a call for assistance along 30 Segar Road at 2.10am and arrested a 39-year-old man for threatening, abusing or insulting a public servant.

Stomp understands that Li was a passenger who had boarded the taxi and was being dropped off at his place at the condominium.

He was believed to be drunk at the time of the incident.

After Mr Chen left the premises, he realised that Li had left his handphone behind and drove back to return it.

However, instead of being grateful, Li turned violent and started punching Mr Chen.

According to Lianhe Wanbao, the assault left Mr Chen with injuries on his head and left wrist.

Ms Lai's video, as well as another clip recorded by police cameras, were played in court during Li's trial.

Pleading for leniency, Li's lawyer said that the accused had mistakenly thought that Mr Chen had taken his mobile phone, therefore resulting in the attack.

He also said that Li had taken up drinking as the property market was not doing well and he was facing enormous pressure at work.

Prior to the incident that night, Li had been entertaining clients and had consumed a lot of alcohol including red wine, canned beer and spirits.