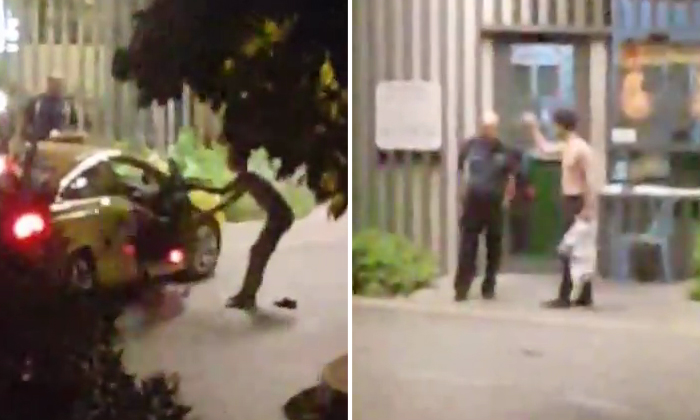 The man was sentenced to four weeks in jail and fined $5,000 for voluntarily causing hurt and using abusive language against a public servant.

A man was caught on camera attacking a taxi driver during the wee hours of Oct 12 at Blossom Residences condominium.

Facebook user Getty Lai filmed a video of the incident and said police, who were called in to the scene, arrested the man.

In response to media queries by Stomp, the police said they received a call for assistance along 30 Segar Road at 2.10am.

A 39-year-old man was arrested for threatening, abusing or insulting a public servant.

Stomp understands that he had displayed abusive behaviour towards the police.

Stomp understands that the man had boarded the taxi and was dropped off at his place at the condominium.

The passenger, believed to be drunk, paid his fare and exited the vehicle.

After the cabby left the premises, he realised that the passenger had left his phone behind and drove back to return it.

Stomp understands that was when the man turned violent and started punching the cabby.