Excuse me, are you on secret mission? Taxi driver repeatedly tailgates cars and drives recklessly 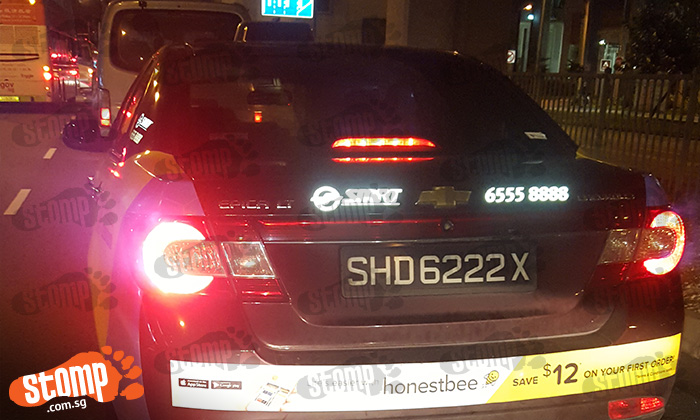 Like a scene straight off a James Bond movie, one particular taxi driver has been repeatedly tailgating cars and recklessly driving along the road, almost as if he was on a secret mission.

Stomper Xiaobai told the Stomp Team about his encounter with a taxi driver who tailgated his and several other cars inside the Kallang-Payar Labar Expressway (KPE) tunnel, and upon exiting, drove at an estimated speed of 140 mph.

"On Dec 6, at 7.40pm, I was driving home, when the taxi driver of SHD6222X SMRT, was driving too closely to my car and even repeatedly sounded the horn at me.

"The taxi driver then went on to tailgate many cars, before dangerously speeding off.

"The driver made an exit along Punggol way, and headed towards Waterway Point.

"To my surprise, there were no passengers inside."

While browsing through Google, Xiaobai realised there was another complaint about the same taxi driver on Facebook.

"My family and I had just arrived in Singapore and we got on the taxi SHD6222X.

"The taxi driver was rude and drove dangerously.

"First, he was not willing to help us carry our luggages to the car boot, and about 1km away from the airport, the driver began to tailgate a car, jam the brakes, and press the car horn for awhile.

"He then increased his driving speed and accused me of giving him the wrong address.

"When I told the driver to slow down as my kid was with me in the car, he did not bother to, and continued recklessly driving."

The Stomper has since recounted this incident to SMRT Feedback and the Land Transport Authority (LTA).