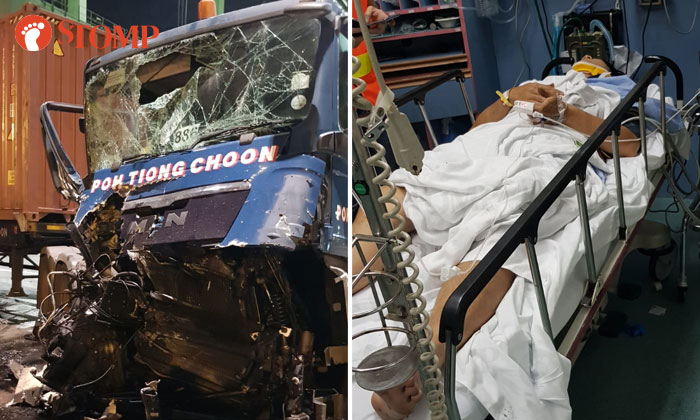 A 32-year-old man was taken to hospital after an accident involving two prime movers occurred at Brani Terminal, operated by PSA, on May 30 at about 11pm.

A Stomper shared photos of the incident with Stomp that had been circulating on WhatsApp.

In the photos, the front of one of the prime movers appears to be badly mangled.

A man is seen lying on a trolley bed and wearing a neck brace. Another man is seen being attended to by a paramedic.

A Singapore Civil Defence Force (SCDF) spokesman told Stomp that the two prime movers had collided, causing one of the drivers to be trapped in his seat.

"He was rescued by PSA's Emergency Response Team prior to SCDF's arrival," the spokesman said.

The man was taken to Singapore General Hospital in a conscious state.

In response to a Stomp query, the police said they were alerted to the industrial accident at 11.51pm.

Related Stories
Female driver suddenly jams on brakes at amber light, causing Stomper to crash into car's rear
When the road markings tell you to slow down, you better do so
Man, 85, injured after getting hit by car at Bedok Reservoir Road, family appealing for witnesses
More About:
Accidents
injured
PSA