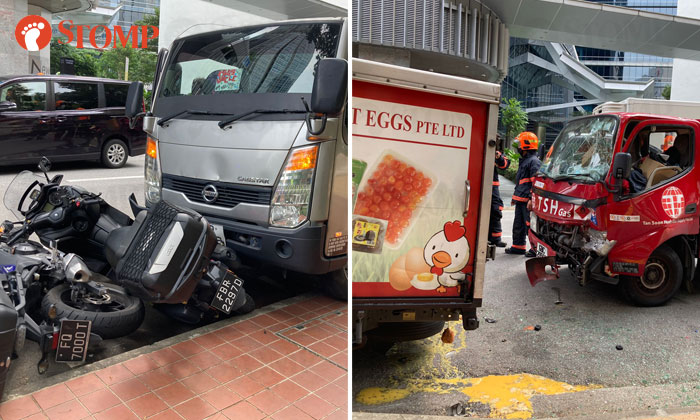 A lorry driver was taken to hospital after crashing his vehicle into a stationary lorry and two parked motorcycles along Telok Ayer Street towards Amoy Street on Monday morning (Dec 6).

Stomper Mark alerted Stomp to the incident and shared photos he took at the scene.

In the photos, Singapore Civil Defence Force (SCDF) officers are seen attending to a man sitting on the pavement.

The front of a red lorry carrying gas cylinders appears to be badly damaged.

Broken eggs are on the road and a sign at the front of the other lorry says, "Eggs uncle on delivery".

The red lorry had apparently hit the rear of the eggs delivery lorry, knocking over two parked motorcycles.

In response to a Stomp query, the police said they were alerted to the accident at 10.37am.

A 58-year-old male lorry driver was taken conscious to the hospital, a police spokesman said.