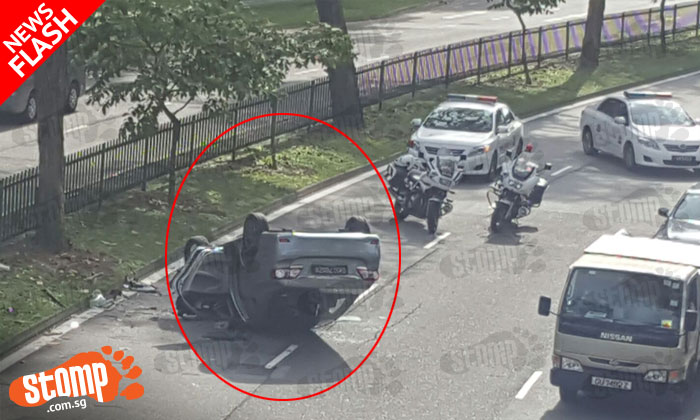 Stomper Mark alerted Stomp to an unusual accident at around 9.30am this morning (Feb 1) as he was travelling along Toa Payoh Lorong 1.

He had witnessed a car overturned on the other side of the road, in front of the Toa Payoh Police Centre

“When I drove past, I saw people helping the driver who was trapped in the vehicle to get out.

“And officers from the Singapore Police Force were making sure members of the public were not coming too close to the scene.

“It’s pretty crazy, I was driving in this direction and the car was overturned on the other side of the road, with its bonnet facing the oncoming traffic.”

The Stomp team rushed down to the scene to get more details with regards to the incident.

"I saw a construction worker using his helmet to try to break the window of the vehicle, to help the driver out."

Stomp understands that the driver had already been removed from the vehicle upon arriving at the scene.

The police provided Stomp with the following lines:

"On 1 Feb 2017 at 9.18am, the police were alerted to an accident involving a car along Lorong 1 Toa Payoh before Lorong 2 Toa Payoh.