S'porean family injured in tour bus crash: Father with punctured lung is fighting for his life 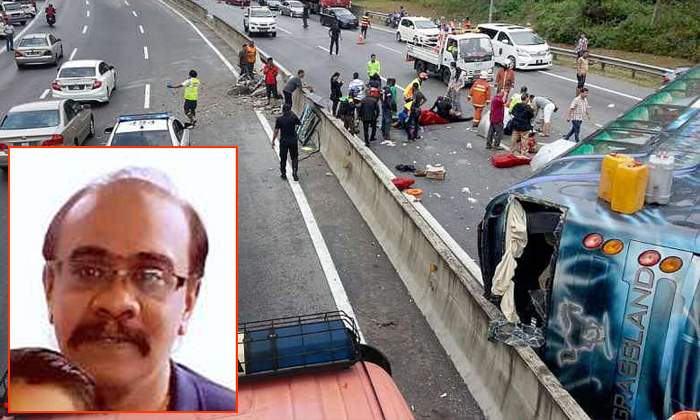 A Singaporean is fighting for his life in hospital after being injured when a tour bus crashed while returning here from Malaysia.

Although no one was initially reported as being critically injured in last Wednesday's accident, The Sunday Times has learnt that Mr R. Manokaran, a barber, broke his arm and a wrist bone, and punctured his lung.

He now needs assistance to breathe, according to his niece, Ms V. Chandralekha, who is at the hospital with him in Kuala Lumpur.

He is in the intensive care unit, and has not regained consciousness since the accident.

Mr Manokaran, 52, his wife and two of their three children were returning from a four-day holiday in Genting Highlands on a Grassland tour bus when it crashed into a road divider and overturned on the highway linking Karak to Kuala Lumpur.

The cause of the crash has not been determined.

The impact caused the double-decker to skid for about 20m, Malaysian newspaper The Star reported.

The Malaysian driver and nine of the 12 passengers on board the bus, all of whom are from Singapore, suffered injuries, a spokesman for Singapore-based Grassland Express and Tours told The Straits Times on Wednesday night. He said at the time that none were critically injured.

Mr Manokaran's son, Mr Navindran Manokaran, 19, told The Sunday Times yesterday that the family visits Genting Highlands twice a year, and while they normally drive, his father had decided to take a bus this time.

Mr Navindran said that he was sleeping during the journey home when he was woken by a loud noise.

The bus hit a road divider, spun and toppled over, and he was knocked unconscious, he said.

When he came to, his hip was cut by glass and his arm was injured, but he pulled his father out of the wreckage.

The family, who had not been wearing seatbelts, had been sitting in the upper deck and Mr Manokaran ended up in the stairwell after the crash.

They were first taken to a hospital in nearby Bentong before being transferred to Kuala Lumpur General Hospital.

Ms Chandralekha, 21, said Mr Manokaran cannot be moved as his condition is unstable.

"It is a government hospital but facilities are not ideal," she said. "A lot of medication is being given to him to support his heart rate and blood pressure."

His wife, Madam Muniandy Barvathi, 48, was flung out of the bus, but did not suffer major injuries.

She returned to Singapore on Friday and underwent ankle surgery at the National University Hospital (NUH) yesterday.

Mr Navindran returned to Singapore yesterday and was warded at NUH for observation.

Yesterday, Grassland Express and Tours operations manager Steven Chew said that five passengers had returned to Singapore and that the cause of the crash is still under investigation.

The Sunday Times understands that another Singaporean injured in the crash is also in critical condition.

Officials from the Singapore Embassy in Malaysia are assisting the families of those injured.

Related Stories
16 Singaporeans injured in Hokkaido bus accident
Singaporean family of 3 hurt in 5-vehicle accident along Malaysia's North-South Expressway
Woman run over by own car in Malaysia after she tried to stop it from rolling backwards
More About:
accident
Malaysia
Bus
injured