Driver posts video to slam cabby for cutting into his lane, but gets flamed by netizens instead 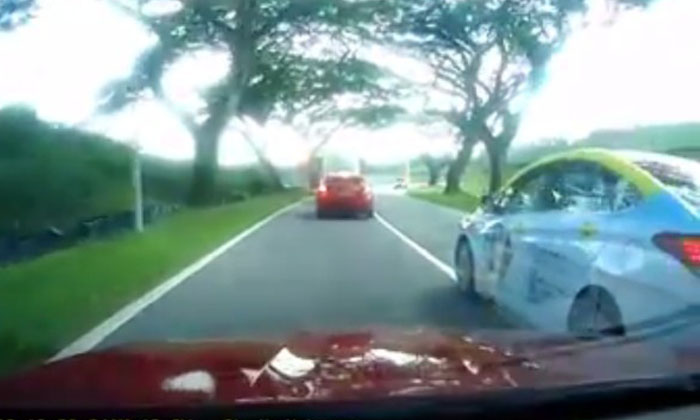 A driver posted a video of a taxi driver cutting into his lane, but got criticised by netizens instead.

A Stomper alerted us to a video of the incident, which was shared on Facebook page Beh Chia Lor on Nov 29.

According to the caption of the post, the video was submitted by Wai Lok Lee and took place along Tampines Road on Nov 26 at 10.26am.

"I would like to highlight /report this dangerous incident of a Comfort yellow taxi driver SHC7563K.

The video, which is recorded by an in-car camera, shows a car being overtaken by a yellow taxi.

The lane with the opposing flow of traffic was empty as the taxi was overtaking the car.

After the taxi enters the right lane, a car from the opposite direction passes it.

The caption of the post also included an explanation by Wai, who said that he would like to report the "dangerous incident".

He explained that the yellow taxi was driving in the next lane and that he was "not expecting a vehicle" beside him.

He said: "I realised there was a yellow cab beside me, trying to push me to the right, out of the road.

"At the same time, there was incoming traffic coming from the opposite direction."

He also said that there was going to be a head-on collision and that the drivers that were in front of him were braking too.

According to him, he then slowed down and felt that the situation he was in was a very dangerous one.

However, Facebook users in the comment section pointed out that the driver of the car sped up when the taxi was overtaking him.

Facebook user Richard Lincoln said that it was "obvious" that the driver of the car sped up when he noticed the taxi overtaking him.

Facebook user Alvin Loh said that the driver of the car should be taken off the road and even called him "ill-hearted".

Facebook user Max Tay addressed the driver of the car and said that he should have slowed down.

Facebook user Suriya Bala Kerisnan Thevar wanted to watch a longer version of the video to find out what actually happened.

Facebook user Yip Wei Chet put it simply and said that the taxi driver was allowed to overtake as there were no double white lines between the two way road.

According to the Highway Code of Singapore, a driver is not allowed to ever cross a single continuous or broken white line along the middle of the road unless you can see that the road ahead is clear.

With regard to overtaking where there are continuous double white lines painted on a road to separate traffic flowing in opposite directions, you may not overtake at the double white lines unless you keep entirely to the left of such lines.

Related Stories
Excuse me driver, but you seem to be going against traffic
Watch how biker and driver repeatedly overtake each other on expressway
Driver causes chain-collision after swerving right into trailer on TPE
More About:
reckless
reckless drivers
inconsiderate
taxi