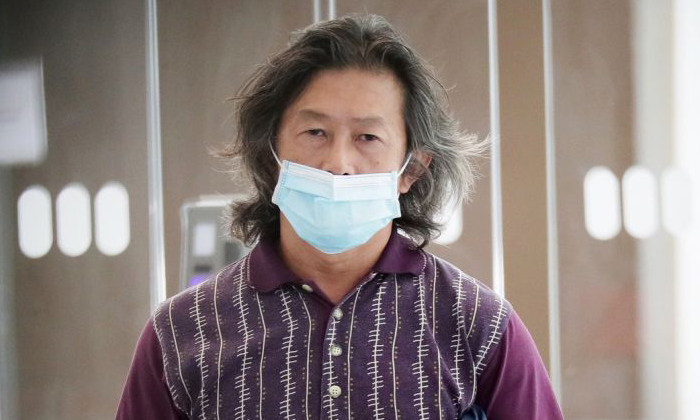 A 52-year-old man intentionally pointed a laser beam towards other motorists on an expressway, as he wanted them to make way for his car.

Patrick Ong Choon Hua, an aquathlon coach, did so despite knowing that it could potentially lead to an accident, as other drivers could be blinded temporarily.

The Singaporean pleaded guilty on Thursday (June 24) to one count of performing a rash act and was sentenced to two weeks' jail.

A second charge for a similar offence was taken into consideration during sentencing.

The court heard that a man, who was identified as Mr Lim Chee Yong, 41, was driving a car on the extreme right lane of the Kallang-Paya Lebar Expressway towards the Marina Coastal Expressway at around 5pm on Sept 2 last year when Ong drove directly behind him.

Ong flashed his vehicle's high beams and turned on the hazard lights to signal to Mr Lim to change lanes, as he felt that the younger man was driving too slowly.

Deputy Public Prosecutor R. Arvindren said that there were other vehicles in the lane to Mr Lim's left at the time and he was unable to immediately change lanes without compromising his safety or the safety of other road users.

Ong then took out a laser pointer and shone it at Mr Lim's rear view mirror.

"The complainant felt irritation in his eyes and was briefly unable to focus on the road ahead. The accused pointed the laser pointer in this manner for about 13 seconds."

Ong switched to the middle lane soon after and drove closely behind another car.

The prosecutor said Ong then decided to point the laser beam diagonally at Mr Lim's vehicle again for about nine seconds despite the fact that the latter was not obstructing his vehicle any longer.

The court was told that Ong continued to use the laser pointer until Mr Lim's vehicle was no longer in his line of sight.

Mr Lim's rear-facing in-car camera captured the incident and he alerted the police later that evening.

Ong was offered bail of $5,000 on Thursday and he will surrender himself at the State Courts on Friday to begin serving his sentence.

He could have been jailed for up to six months and fined up to $2,500 for committing the offence.