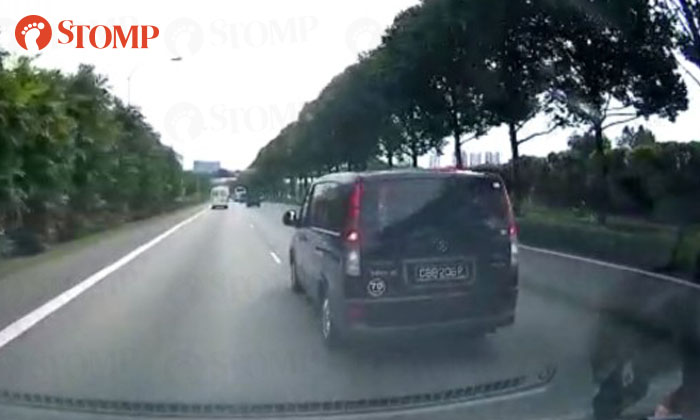 A black van, with license plate GBB206P, was caught on camera repeatedly cutting in and out of a lane on Nov 27 at about 11.04am.

Stomper Chan, who was driving the car behind the van, sent Stomp footage of the incident captured by his in-car camera.

The Stomper was along the Ayer Rajah Expressway (AYE) headed towards Jurong.

He told Stomp: "I was in the car and there was a van driving rather slowly in front of me.

"I flashed my car's high-beam headlights at the van driver to get him to go faster, but he did not.

"So, I decided to overtake him."

Stomper Chan said he overtook the van and filtered into the extreme left lane.

The van driver then sped up and overtook the Stomper's car, resulting in the incident in the video.

The video shows the van in the centre lane, jamming his brakes and swerving in and out of the second lane.

"I come across different types of drivers every day, but none that behave as extremely as this van driver did.

"I told myself to keep calm and just keep on driving.

"These types of drivers endanger other roads users.

"I did not want to react rudely back to him as I would be taking part in a vicious cycle of bad drivers."

Related Stories
Excuse me driver, but you seem to be going against traffic
Watch how biker and driver repeatedly overtake each other on expressway
Driver tailgates car past Mandarin Orchard carpark gantry, turns off headlights to be tactical
More About:
reckless
inconsiderate
reckless driver
van
AYE