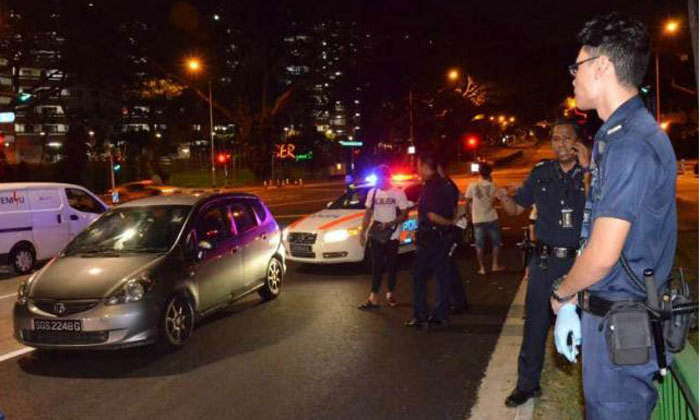 An employee of a car rental company tailed a driver who rented a car from his company, after reading on industry-related websites that the driver had "a bad record".

The 22-year-old employee of Elitez Car Rental, who gave his name as Mr Zheng, followed the rented Honda to Telok Blangah on Friday (Jan 13) night, Shin Min Daily News said in a report on Saturday (Jan 14).

As he got out of his vehicle to take a photo of the Honda and ask the passengers to alight, the driver allegedly ran him over.

He was not badly injured.

A police car that happened to be in the vicinity pursued the Honda in a car chase for up to 5km, Mr Zheng said.

To avoid the police, the Honda driver went around an area in Telok Blangah two to three times, slowing down only after 20min at the junction of Lower Delta Road and Bukit Purmei Avenue after having suspected engine trouble.

Shin Min understands that the police found a parang and medicine believed to be drugs, in the car. This, after smashing the windscreen of the vehicle with a baton to order the driver and passenger out of the vehicle.

Eyewitnesses told Shin Min that the man and woman in the car were not cooperative and locked themselves in, refusing to get out.

The police confirmed with The Straits Times that an accident involving a car and a pedestrian occurred at 11pm on Friday along Telok Blangah Crescent.

"The 20-year-old male car driver and the 21-year-old female passenger were arrested for drug-related offences," said a police spokesman.

Related Stories
'Drink driver' evades roadblock in Serangoon, drives against traffic, and ends up in a ditch
Watch how reckless driver cuts it close by driving in the middle of road at Woodlands Drive 16
"Why do you care? It's not your problem": Bus driver uses Bigo app while driving and allegedly tells concerned user to mind his own business
car chase in Telok Blangah
police
car
dangerous driver
dangerous driving
arrest
drug
drugs