Near-collision with Mercedes going against traffic during rain in Yishun: 'So scary ah!' 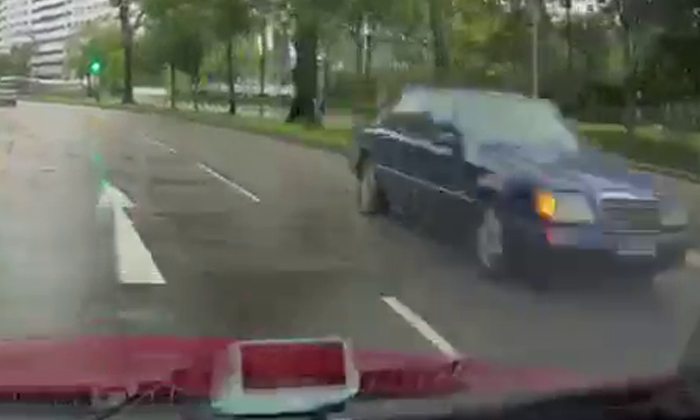 A driver was shocked after having a near-collision with a car that was travelling against traffic in Yishun Central on Sunday (Dec 15).

Facebook user Trevor Mok posted a video showing his close shave with the errant Mercedes-Benz driver near Khoo Teck Puat Hospital at 11.17am. It was raining at that time.

In the video, Mok can be seen travelling on the right side of a two-lane road when the Mercedes approaches on the same lane — but in the opposite direction.

Mok, who narrowly avoids an accident with the Mercedes, can then be heard expressing his disbelief over what had just happened.

"Aiyo! Nearly langgar leh! So scary ah! Alamak! Why you go so fast!" he is heard exclaiming to a companion in his car.

"Walao, you wrong you faster three-point turn already mah, why you still want to chiong until there!"

Calling for the authorities to take enforcement action, Mok wrote in his video caption: "...Please do something about this dark blue Mercedes-Benz driver before he kills someone on the road."

In another thread, Mok also called for the Mercedes driver's licence to be revoked.